Straight from Commando HQ comes the details of the latest batch of four Commando comics which go on sale today. 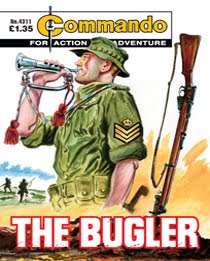 Issue 4311: The Bugler
Story: Ian Clark Art and cover: Ibanez
Originally issue 2720 published in 1993
The plaintive notes of the Last Post sounded eerily over a lonely clearing in the Malayan jungle as Colour-Sergeant Jimmy Morrison mourned the loss of an old friend. They had fought and suffered together for many years in the steamy, dangerous heat of the tropics — but not always on the same side! 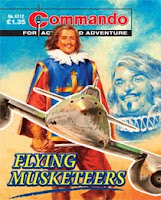 Issue 4312: Flying Musketeers
Story: Ian Clark Art and cover: José Maria Jorge
Originally issue 2713 published in 1993
Like the famous Musketeers of old, the four young German pilots, fresh from training, believed in the motto, “All for One and One for All!” It stood them in good stead in their early combat patrols, while their Focke-Wulf Fw190s were still the scourge of the skies.

But they were to need their light-hearted comradeship even more in the dark days that lay ahead for the German Luftwaffe... 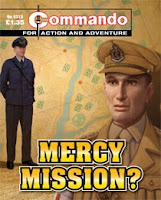 The First World War, Mesopotamia, and First Lieutenant Paul Wardle is a doctor in the Royal Army Medical Corps. He has vowed only to save lives -- never to take them -- even during vicious conflict.

When he and his wounded patients are stranded on a grounded hospital ship, taken over by a ruthless German Naval commander with a grudge, the situation looks increasingly desperate. For the sake of the wounded, Paul will have to fight for their survival. Can he stick to the principles he values so highly…? 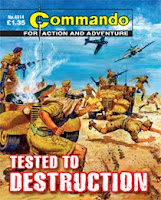 The North African Desert is a hostile environment at the best of times, pushing men and machines to their limits — and beyond. As a place to fight a modern mechanised war it has to be one of the worst imaginable.

Yet Major Orde Gatwin, his band of oddbods and a motley collection of experimental machinery were there and had to do just that. Would they be strong enough to survive?