Former Commando editor George Low (above right, with former Dandy editor Morris Heggie, left and Commando writer Ferg Handley, middle) was the surprise guest at the Oxfam Comics Event in Edinburgh on Saturday 17 July. There he joined an impressive line up of artists, writers and editors to talk comics for the afternoon, sharing memories of his time on Commando. Attendees also had the opportunity to buy a wide range of old and new Commandos from the event's sales stall with all proceeds going to Oxfam. 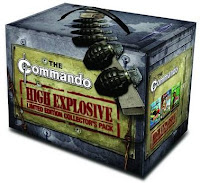 Since retiring from Commando, George has maintained his links with the title by selecting the stories and writing the introductions to Carlton's range of large Commando reprint books which has now reached a shelf bending eight different titles. Following on from the limited edition box set Commando Ammo Box, Carlton are releasing a second boxed set of Commando books.

Due for release on 4th October 2010, the Commando: High Explosive

box set includes three of the reprint books - Bandits at 12 O'Clock, Rumble in the Jungle and D-Day: Fight or Die! - plus a special reprint of the second issue of Commando from 1961, They Called Him Coward!.

Also included in the collection, which is limited to 1000 copies, is a certificate signed by George Low and current Commando editor Calum Laird.