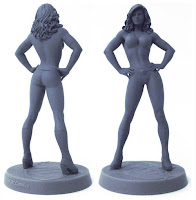 Friends of comic feature writer Jake Black (who is one of the main writers for Britain's DC Figurine Collection magazine, and also wrote some features for me back in my Titan Magazine days) are running a charity auction on eBay to help raise some money for the bills he's had during a recent fight with cancer (which he won, by the way, which is great news).


This is the first of ten auctions of some amazingly limited edition figurines (each featuring different characters) and all money made in the auction will go to Jake.

The first figurine on offer is the original grey cast of Teen Titan Donna Troy (originally presented in DC Comics Super Hero Collection #22). These grey casts are the first to be taken by the original sculptor and are used for the first part of the extensive approval process Eaglemoss go through with DC Comics.
To date only a handful have been given away as gifts/prizes and the grey cast of Donna Troy has never been released to the world, so this is your chance to own a figurine that's not just collectable, but ultra-collectable - something eBayers clearly already appreciate, as the bidding for Donna currently stands at £82, all of which has left DC Figurine editor Alan Cowsill, who has organised these auctions, rather stunned!
The figurine will be accompanied a copy of the DCSHC Donna Troy issue, signed by the editorial and design team.

Jake Black is a published comics author and one of the main writers for the DC Comics Super Hero Collection. He has been with the series since the beginning and wrote the main features for the Donna Troy issue.
Alan tells us several more figurines will be released over the coming weeks - check out the auctions being offered by this eBay seller for new auctions.
• Check out the Donna Troy auction on eBay at: http://cgi.ebay.co.uk/ws/eBayISAPI.dll?ViewItem&item=280535117160
Posted by John Freeman at 11:34 pm

These are all worth the price! A true collector's item. I rarely see these kind of limited items for sale at ebay. Amazing items once again, Im pretty impressed.