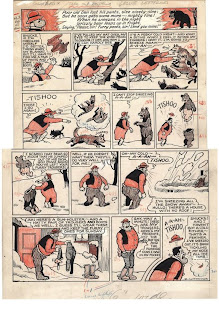 (with thanks to Lew Stringer and the Forbidden Planet International blogs who spotted this first): DC Thomson has just revamped its web site for its Scottish newspaper The Courier -  and  included a fantastic gallery of comic work by Dudley D. Watkins.

Considered an icon of Scottish culture, Watkins amazing talents are forever linked with DC Thomson, working on comics, newspapers, books and more from 1925 right up until his death in 1969, gving life to unforgettable characters such as The Broons, Oor Wullie and Desperate Dan.

The paper presents a gallery of his work, drawn from the huge DC Thomson comics archive, much of it not been seen since it was first printed, so many decades ago, including strips from annuals, religious images from a 1957 Beezer book (Watkins was a devout Christian and it's thought he was given rein to create these images in order to persuade him to do other work).
Offering some fine examples of the artist's range and offers the chance to see different versions of some of the most famous characters "Watty" created, with very familiar faces from the Sunday Post.
• View the gallery on The Courier web site
Desperate Dan © 2010 DC Thomson
Posted by John Freeman at 3:25 pm