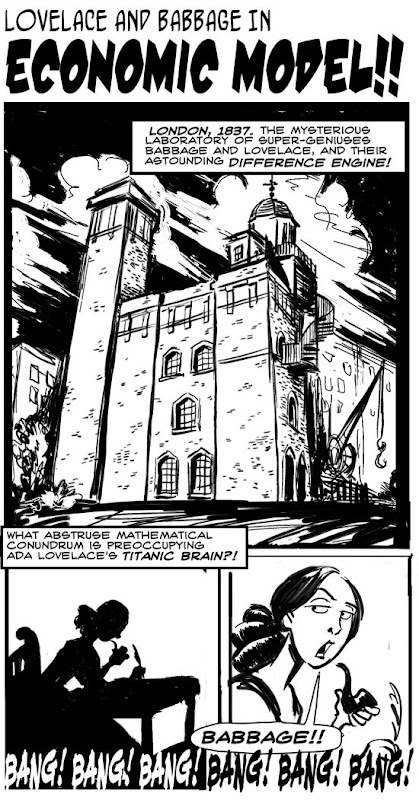 For anyone interested in exhibiting artwork and/or donating artwork to the Caption auction, part of Mad Science Caption 2010 at the East Oxford Community Centre on 31st July - 2nd August, the organisers tell downthetubes they can accept artwork right up to the opening day of this ace British small press event.

However, if you'd like your artwork to appear in the Mad Science Caption 2010 souvenir printed booklet then they will need a 300dpi scan, or hard copy of the artwork by 13th July. Any queries to jay.ealesATgooglemail.com.

Guests already lined up include Sydney Padua, animator and creator of the superb webcomic, The Thrilling Adventures of Lovelace & Babbage (sample above), which sees Victorian scientists Ada Lovelace and Charles Babbage fighting crime; Al Davison, who will once be providing one of his fabulous drawing workshops, bringing along stock from his Astral Gypsy Comic Shop, and is also designing the Caption t-shirt this year; and John Miers, who will be doing a talk about a large-format project, Babel, exhibited as part of last year's Comica, that uses a wordless pictorial language to interpret the biblical myth.

Jeremy Day will kick Caption off on the Saturday morning with a workshop; Tony Hitchman will be providing us with one of his fun quizzes on the Mad Science theme.

This year's Special Guest is Melinda Gebbie, who started out in the American alternative comics scene in the 1970s and is now best known for her collaboration on Lost Girls with Alan Moore; Sarah McIntyre will be interviewing Darryl Cunningham about his new book Psychiatric Tales and his other work; and 2000AD and incoming Strip Magazine UK artist PJ Holden, will be talking about digital comics.

Other guests are Paul Duffield, artist on Warren Ellis' FreakAngels, who will join the webcomic panel, Neill Cameron and Kate Brown, who will be talking about their DFC Library books, Mobot High and Spider Moon.

• Caption report they are also experiencing a few problems with the Caption website at the moment, so you can also check the Facebook Event page or Livejournal site for the latest news.

I can't find a timetable anywhere online for Caption. I'm interested in coming but I can't find out much about what's happening apart from a guest list. Could you point me in the right direction?

The Facebook page has details, per the links above.