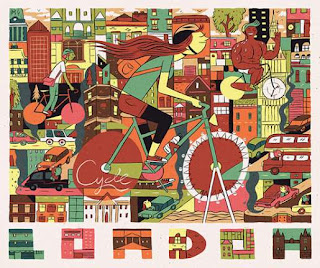 Anyway, a bit of tube surfing always peps me up. What's out there today?

Ace cartoonist Darryl Cunningham offers previews of the strips he's currently working on over at his blog. He's been doing various science-related strips and the latest one is about the supposed 'moon hoax'. He's also working on an instalment of his rather ace 'Uncle Bob' series. All good stuff!

The Forbidden Planet International blog makes us aware of cartoonist and illustrator Luke Pearson's inclusion in an exhibition hosted by the London Transport Museum (well done, Luke). The exhibition is on the theme of cycling and if you want to check out the art on display, it runs until 22 August. Some of the art is also online at the Guardian website. Go take a look!

Cartoonist Sarah McIntyre has been on holiday to Cornwall and I suspect that in the coming days she'll be posting some cool artwork chronicling her trip. There's already one picture up.

Just stumbled across this 2009 mini-interview with cartoonist James Nash. James is a major talent and the interview is worth a read.

‘Come and play in our Heroes and Monsters exhibition (20 July – 19 September) and see Jim Medway’s fantastic mural. It brings those Ancient Greek superbeings into our modern world and sends you on a journey of discovery around the gallery. There you can put on your crown and pick up one of Jim’s amazing interactive Hero Quest maps. You are the hero in your own epic story as you play, draw and imagine your way around the gallery, finding mysterious objects, meeting other heroes and immortals and slaying monsters.’


And finally, I wanted to mention the Birmingham Zine Festival. Running from September 10 - 12, it looks like it's going to be a lot of fun, with a zine fair, zine picnic, Atta Girl zine party, exhibitions and also workshops to be announced. (Via Pete Ashton.)
Posted by Matt Badham at 8:55 am