First 2000AD Dredd cover to go under the hammer 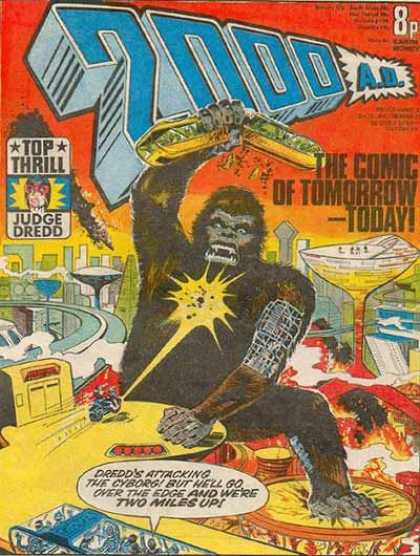 Veteran comics artist Barrie Mitchell, perhaps best known for his work on Roy of the Rovers, is selling some of his art - including the 2000AD cover that was the first to feature Judge Dredd.

Featuring on Issue 5 of 2000AD, published in March 1977, the cover sees Dredd in action against a giant robot, Krong, inspired by the story in the same issue, which was drawn by Carlos Ezquerra.

Despite having the honour of being the first Judge Dredd cover artist, Barrie's 2000AD career is quite scant in comparison with the huge amount of work he has done for a slew of publishers down the years. His credits include work for girls titles such as Bunty, Mandy and Diana, as well as action titles like Look-In, Pow and Wham, and various Marvel UK titles. He was the final artist on the Roy of the Rovers comic, drawing the strip from October 1992 until its cancelalion in March 1993, returning the character in 1997. He also worked on the The Mirror's Scorer strip in 1989-1990. (More info here on this downthtetubes comic artists page)

The cover will be auctioned by Island Auctions at Cowes Masonic Lodge on the Isle of Wight on 5th August 2010, as part of a larger sale of special auction of Fine Art & Maritime Collectables during Cowes Week.

In addition to this 2000AD art, Barrie told downthetubes he is selling some other pieces of art, some by other artists, in the auction. These include some pages of his own Doctor Who strip for Doctor Who Magazine, featuring Third Doctor Jon Pertwee, two pages of his Roy of the Rovers work, a signed page of the Penthouse strip Wicked Wanda by Ron Embleton, bought some years ago at a Society of Strip Illustrators event, two examples of John M. Burns Seekers and a page of Dan Dare from the Eagle, drawn by Keith Watson in the late 1960s. (Barrie wasn't able to tell us which story this art was from).