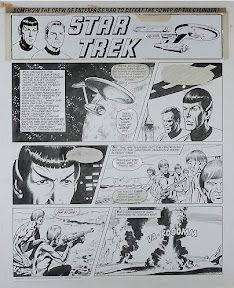 Published in August 1972 in Valiant and TV21, John Stokes was one of several artists to work on the property, which first featured in the weekly comic Joe 90: Top Secret in January 1969, six months before the TV show itself began to air in the UK on BBC1, coinciding with the first moon landing.

Star Trek transferred to TV21 when the two titles merged in September 1969, becoming TV21 and Joe 90.

TV21, a pale shadow of its former 1960s self, was eventually merged with Valiant in late 1971, with Star Trek one of the strips that survived the merger. 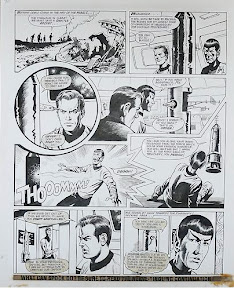 The strip appeared in colour, his art often falling prey to the vagaries of Valiant's letterpress printing, running until 29 December 1973.

This artwork was part of a huge deal between IPC and collector Peter Hansen and Blase Books, run by Phil Clark, regularly offer items via eBay, sold as from the Peter Hansen Five Star IPC Archive Collection.

While the British Star Trek comic is riddled with continuity errors, especially in early stories where the artists and writers had no idea of the show's format or how its vehicles looked, aside from what we can only assume would have been a few reference photographs, there is still plenty of interest in this curious spin-off from the hit SF franchise, which included one of the first attempts to visualize the Romulan homeworld and a story set on Earth - a setting never realized on the original TV series itself.

Perhaps there may yet be interest in a print collection of the material at some point.

• Written by pop-culture historian Alan J. Porter, author of the bestselling James Bond: The History of the Illustrated 007, Star Trek: A Comic Book History, published last year, should be of interest to people interested in the story above, offering a complete history of the Star Trek universe in comic books and newspaper strips all over the world.

It features nine information-packed chapters detailing the history of Star Trek in comic books and newspaper strips from the first Gold Key comic book, the British Star Trek strips to Marvel and DC's titles, and up to the present day. Covering all publications of the entire Star Trek universe it includes creator interviews, unpublished artwork, and a detailed checklist.
Posted by John Freeman at 8:26 pm

Great to see the original art from some of these pages see the light of day. I covered the UK Trek stories in detail in my recent book "STAR TREK: A Comics History" from Hermes Press.

In fact doing the research made me realize that the Joe 90 Trek stories were in fact my first exposure to Star Trek in any format.

While working on the book we investigated the idea of doing a reprint collection of the UK strips, but it turns out that the rights and contracts as in such a mess that it didn't make such a project viable. It's a shame as I think there would be a market for this unique British approach to one of SFs greatest franchises.

Thanks for this - I've added a link to your book in the story. Shame reprint sounds impossible, although I would have thought that since CBS own Star Trek and the Star Trek strip was licensed, CBS would own it and any reprint rights, and would be the first and only port of call on this.

I'd be interested to know who declared ownership in some respect on the material...