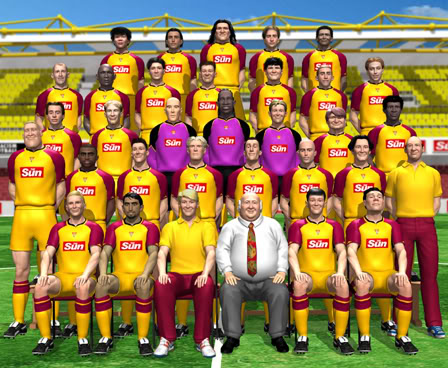 Long-running football strip Striker is set to return - this time as a weekly strip in an as yet unnamed magazine.

A Striker movie is also again in development.

Announcing the return on the official Striker forum (membership required to view link), creator Pete Nash told fans of the strip, which reached the end of its run in British national newspaper The Sun earlier this year, that the strip looked likely to resume towards the end of January.

"It will be one page in a weekly mag but as I've said before, I can't mention [its name] until the contract's been signed and both parties have agreed to it being made public," he said.

Although the strip reached a natural conclusion in the The Sun, the new home for the strip will feature all-new adventures from Warbury.

"It will pick up from where it left off in The Sun but the beauty of it being one page a week is that it will give me the time to work on Striker the movie," says Pete.

Striker remains one of few "3D" comics to have enjoyed ongoing success, both as a newspaper strip and, for a short time, as part of a weekly comic. Although it no longer features in The Sun it continues to enjoy a fan following and various tie-in projects are "in the works".