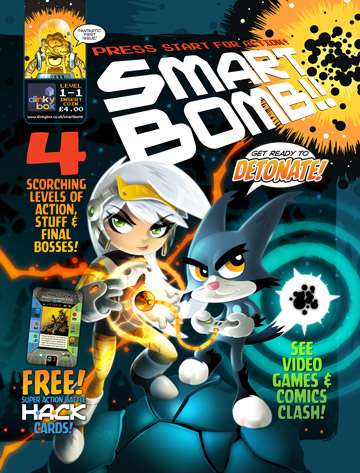 You can be forgiven for thinking that crossbreeding geeks with nerds might result in some sort of slack-jawed dribbling one-eyed mutant of a comic, with acne encrusted pages. But no! Somehow editor Wil Overton has managed to create something quite beautiful (this statement should in no way be viewed as an endorsement for comic nerds and computer geeks to breed).

The presentation throughout Smart Bomb is faultless, containing a puzzles page, pull out poster, free giveaway Super Action Battle Hack cards (which successfully satirise the Battle Cards genre, by being overly complex and impossible to play), and a crazy intergalactic furball editor named Kosmikat! At times, it’s almost like reading a professional comic.

Although there’s only four strips inside Smart Bomb, the artwork throughout is crisp and clear, ranging from the near animation-cell quality of Phillip M. Jackson’s ‘Clean Up’ (a brilliantly written tale about two FBI agents who don’t quite have the alien situation under control as well as they’d like to think they do) to the gorgeously painted fantasy artwork of Eddie Sharam’s Double Dragon (in which a T-rex faces off against a Medieval Dragon. Brilliant!).

Wil Overton’s ‘Pulsar Crash’ relied a bit too much on gamer lingo for my liking, though the ‘funny animal’ character in the strip was likeable enough and the cartoon artwork of a high standard.

Ryan Stevenson’s ‘Galactic Libre and the Soul Of Mars’ gave me fond memories of the gritty comic strips that used to run in C and VG magazine, with its moody artwork and claustrophobic ‘Dead Space’ atmosphere.

All in all, a bloody impressive first issue, especially from a bunch of largely unknown contributors who are all talented individuals in their own right. Judging by the preview page of what’s to come, we can expect a similar high standard next issue. So keep your eyes peeled for Smart Bomb Level 1-2, when the comic advances to the next stage!