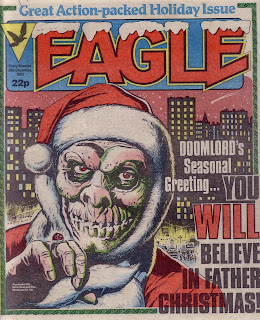 Well hopefully Santa arrived at your house last night and didn't look too much like this.

New Eagle's most popular character was of course Dan Dare but its most popular new character was Doomlord.
The alien Doomlord Vek from the planet Nox created and written by Alan Grant was originally an evil character out to destroy the Earth but eventually became its protector. It this issue he takes on the disguise of Santa to hide from the Deathlords of Nox who are on Earth to kill him. 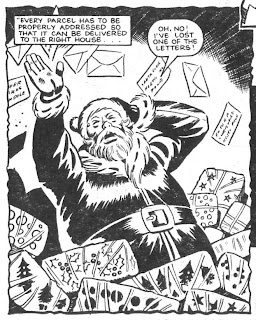 Christmas was also a theme in the issue's Amstor Computer story. The Amstor Computer stories were one off stories based on suggestions sent in by readers and "A Modern Christmas..." was suggested by Daniel Stockman of Middlesex. Artist Ron Turner shows that even Father Christmas needs a little help from modern technology.


And so we leave our Christmas covers for yet another year and but not before we take the time to wish all our readers a Merry Christmas.
Posted by Jeremy Briggs at 7:00 am

That looks like me on Boxing Day morning after the day before.

Got to give the artist points for realism there.