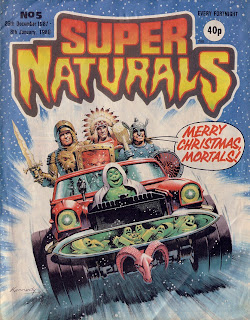 Our run of Christmas covers continue as we countdown to Christmas Day.

Ian Kennedy does his typically superlative full colour cover for the fifth Super Naturals comic based on the range of action figures that were produced, not by Palitoy or Mattel, but by Tonka - which rather explains why they were riding around in what looks like a Big Foot-style pickup truck called the Ghost Finder.

The toys included holograms which changed with the viewing angle and featured broadly drawn characters. The three standing up at the back of the truck are the knight Lionheart, the American Indian Eagle Eye and the Viking Thunder Bolt.

There are more details of the Super Naturals toys on the Action Figure Archive.

More Christmas covers tomorrow.
Posted by Jeremy Briggs at 7:00 am