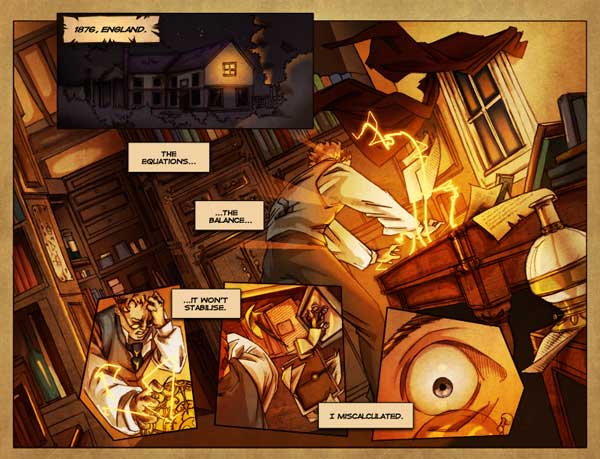 Last year, DC Comics Zuda Comics showcased a stunning new adventure strip by hot new comics talent Amy Pearson. Now, the 22-year-old Sussex based artist has started publishing an updated, revamped edition of the strip on its own dedicated web site - www.mathemacomic.com - and downtheutbes caught up with her to ask her about the strip...

downthetubes: Briefly, tell us what Mathema is about. How would you pitch it to a comics publisher?


Amy: In Mathema, a mathematician has found a way to copy the skills of the ages - dreaming that everyone should have the gift of magic. But the discovery of Mathema forces those with Natural Born Power into the open, desperate to protect their ancient gift by whatever means necessary...

downthetubes: How did you come up with the story?

Amy: I love my fantasy stories but I'll admit I'm pretty selective about the kind of magic I 'buy-into'. Mathema is built on ideas for a magic system – making this work for me personally has taken a long time in the development. Emery appeared first and generally the rest of the story has been constructed around that.

The time period is important to the magic too. I was really influenced by the sense of discovery alongside interest in illusion as entertainment, also particularly new ideas opposing traditional religious forms. 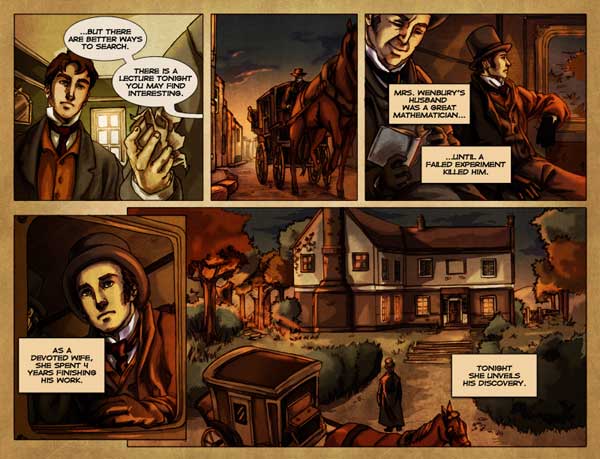 downthetubes: Is this the first time Mathema has been published?


Amy: Mathema was first online over at Zuda. Being in the October 2008 competition. It finished second, and considering the competition I was very happy with that, but it was encouraging to see how divided some people were about the voting.  It was a great competition and experience, and a privilege to be put along side some really great creators.

Visually, the comic has changed a lot since then, I took on a lot of advice from the pros.

downthetubes: Why have you chosen to publish on the web rather than in print?


Amy: Publishing the comic online was really the only way to go for me personally; obviously it'd be amazing to see Mathema in print one day(!) but I've never thought to try and sell it. For me it's about telling the story and sharing it with people – the web is the best way to do that.

downthetubes: What’s your background as an artist? How did you get into creating comics?

Amy: After Uni I went straight into a CG job in London as an animator.  I've always had a great interest in illustration as well and decided to try freelancing. Mathema started shortly after I made the change and most of my comic work has come from exposure during the Zuda competition. Changing to comics has been a real learning curve, but I'm really excited about Mathema being told this way.

downthetubes: Do you have any favourite creators or influences?


Amy: I can be pretty eclectic with the kinds of styles I like reading but to focus on influences for Mathema I think a couple of my favourite works are 'La Licorne' and 'Blacksad': the art in these is always an inspiration. On a purely story level it'd be wrong not to mention a personal Lovecraft influence.

downthetubes: What’s the most challenging thing about working on Mathema?


Amy: Patience! I always have remind myself to be very patient when creating any kind of art; there are so many specifics to the way comic art needs to be done this is even more the case for me and Mathema. (I also have to be patient about the story! There's so much of it I know and can't tell anyone about it yet!)

downthetubes: And what’s the best part about working on it?

Amy: Seeing my characters come to life and sharing that with other people.  I'm sure a lot of story tellers will say that they live with their ideas/characters 24/7, and this is true for me. Mathema has quite a few sides to it, I'm really looking forward to bringing these out along the way too.

downthetubes: What one valuable lesson have you learnt creating comics that you apply to your work now?

Amy: Again patience, but more specifically one of the things I've had to work on most is lettering. It was really the weakest point in the old version and a lot of problems have been solved in the re-release. Mathema is a sole project and previous feedback has really helped make the comic what it is.

downthetubes: What are your plans for the strip — and your — future? (Okay, that’s probably two questions!)

Amy: The plan for the strip is onwards and upwards! Now the comic has it's own space online I'm working on letting people know about it and settling into a regular update time, so people know when they're going to get their next instalment.  The first 'book' of Mathema is underway at the moment but eventually I hope to see the full project completed in three parts...

We'd like to thank Amy for her time answering our questions and strongly advise heading over to www.mathemacomic.com and check it out. And if you want to know more about the strip's development and news on its progress, visit Amy's blog: http://mathema-comic.blogspot.com. Mathema © 2009 Amy Pearson. All images used with permission.