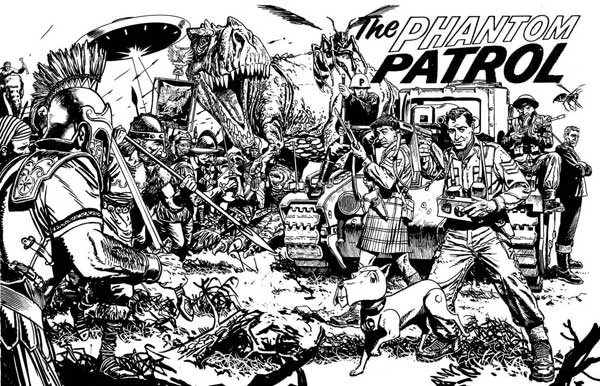 Top British comics archivist Steve Holland has been hinting at it for months now, but he's finally announced the first titles publishing limited edition collections of some old, classic British comics under the imprint of Bear Alley Books: Cursitor Doom and The Phantom Patrol, the latter graced with a stunning wraparound cover by none other than Chris Weston ('rough' version above).

Originally published in the pages of Smash! in 1969-70, Cursitor Doom is being reprinted in full for the first time. With a new cover from John Ridgway, the book features art by Eric Bradbury and Geoff Campion from scripts by Ken Mennell, M. Scott Goodall & Christopher Lowder.

The Phantom Patrol features art by Gerry Embleton and a wraparound cover by Chris Weston. Both books are due to be published in August.

"Bear Alley Books has been born out of a desire to put some classic British comic strips back into print," says Steve. "There has been no tradition here for reprinting strips as albums as there is across Europe and, increasingly, in America. Almost none of the strips I remember with great affection from my youth are in print. I've had the good fortune to have been involved in many of the reprints that have appeared - The Steel Claw, The Spider, Trigan Empire, Rick Random, the war libraries collections - but there are dozens of others I'd love to see collected that no major publisher would consider. There are sound commercial reasons for this so you can't blame them. Still, it's frustrating.

"In 2008, shortly after leaving Look and Learn, I had the notion of publishing some titles myself. It took around 18 months before I could commit to it but here we are in June 2009, a matter of weeks before we publish our first couple of books."

While Steve is a huge fan of long-running strips such as The Steel Claw, he says his choice of titles, for now, are based on material that can be collected in single volumes. "I want to put Bear Alley Books on a firm foundation before I even think of tackling some of the strips I would really love to have on my shelves. The first couple of choices have been books that are complete in a single volume and if something requires two volumes, I'll make sure that I have the two books completed before the first is even offered.

"I find it hugely disappointing to start buying a series only to have it cancelled half way through, so I'll try my best not to put anyone through that. Once I've established to my own satisfaction that I can get books out in a timely fashion, I'll start looking at longer-running storylines."

First Titles Due in August 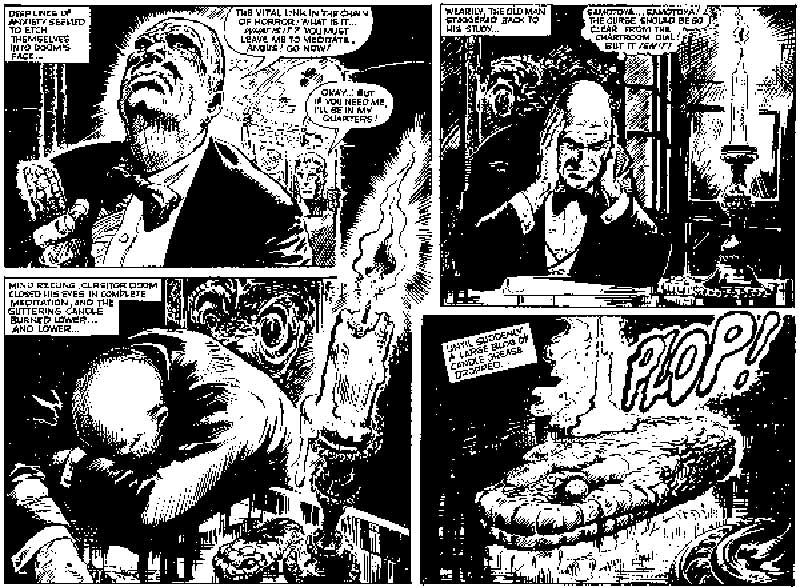 Taking about the titles, Cursitor Doom, says Steve, is a genuine occult adventure and danger. "People died as a series of predicted disasters occurs and Cursitor Doom has to admit that he cannot save them—the future is already written and he cannot change it. This in itself was unusual for British boys’ comics where the hero was always self-assured and expected to save the day. Doom, by contrast, was not always so sure of himself.

"Doom was unique in other ways, too. His look was unlike any other hero in British comics and his great bald dome of a head and thin, wide mouth incredibly expressive in the hands of artist Eric Bradbury. Bradbury was responsible for the dark, gloomy style of the strip. No stranger to the potential creepiness of British comics, he had drawn some of the most memorable strips of the 1960s, including the adventures of Maxwell Hawke, Mytek the Mighty and The House of Dolmann.

"Bradbury’s artwork transformed the strip beyond its gothic roots. The dress shirt and cloak was almost certainly inspired by popular horror films, dating back to Bela Lugosi’s Dracula; Doom’s companion, Scarab, taps into the ancient beliefs surrounding ravens, often seen as a bird of ill-omen; and the ancient houses and echoing halls were straight out of gothic horror fiction.

"Cursitor Doom is an occult classic that has only been partly reprinted in the past," Steve enthuses. "The book will include all of Cursitor Doom's original adventures, including two strips from Smash! Annual and a rarely-seen text story first published in Smash! Holiday Special." 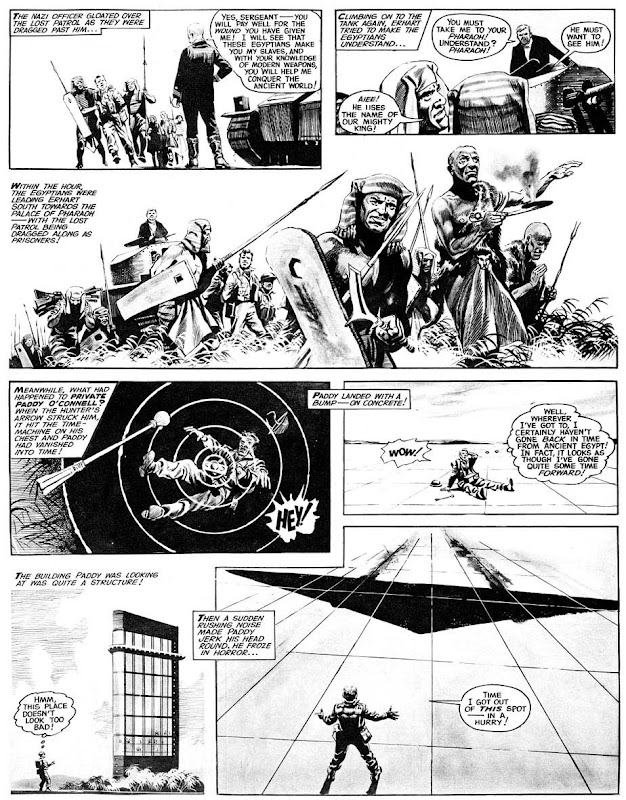 Of Phantom Patrol, a story in which a group of British soldiers find themselves lost in time, Steve says it's "a superb yarn of a kind that British comics did best. Fast-moving and wildly plotted, the story grows more complex as the patrol battles its way through Egypt and Private Paddy O'Connell finds himself adrift in time with a police trooper from the future. Flitting from past to future, will the Sarge and his men manage to escape back to now... and, given the situation they left behind, will they survive even if they do get back?

"When it came to finding a cover artist for The Phantom Patrol, I wanted someone who could tackle anything the strip threw at them," Steve reveals. "Who would be able to draw everything from World War 2 soldiers to Roman legionnaires, from dinosaurs to giant bees, from ancient galleys to futuristic artefacts. The name that came to mind straight away was: Chris Weston."

Chris has been working professionally in comics for over twenty years and has drawn everything from Judge Dredd to The Fantastic Four. Along the way his career has included a huge number of highlights: the 'Indigo Prime' series by John Smith, The Invisibles and The Filth by Grant Morrison, Enemy Ace, The Authority, Ministry of Space by Warren Ellis, Justice Society of America and, most recently, The Twelve by J. Michael Straczynski. Chris has also been doing film storyboards for the upcoming post-apocalypse thriller, The Book of Eli, as well as writing and drawing strips for upcoming issues of 2000AD.

"When I received the above illustration, I accused Chris of giving the term cover rough a bad name," says Steve. "I was knocked out: it spoilt my working day when it arrived because I kept going back to look at it. Part of the reason I've pulled my Bear Alley Books blog site together so quickly is so we can follow the progress of Chris's cover as he has a welcome habit of posting regularly on the progress of his strips and illustrations. If you've not visited his website, take a trip over to The Weston Front and take a good look around. You won't regret it.

"I can't wait to see this in colour."

Steve's commitment to the documentation and promotion of British Comics is legendary: here at downthetubes we're very excited by his new imprint and wish him every success.

• The release of the first Bear Alley Books will be limited to 300 copies each. Ordering information for both Cursitor Doom and The Phantom Patrol will be announced soon. Check http://bearalleybooks.blogspot.com for the latest information!