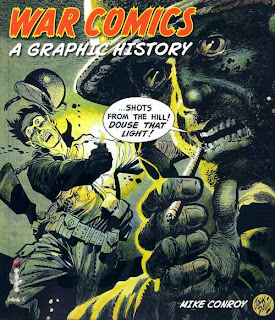 , which covers how comics have covered war in its many forms throughout the centuries.

The book is laid out in a chronological order, not for the comics as they were published but for the conflicts they covered, beginning, perhaps inevitably, with the Battle of Thermopylae in 480BC. While this is best known today through Frank Millar’s 300, the book also covers earlier comic versions of the same tale from from Dell Movie Classics to Blazing Combat.

Speaking to the American journal Kirkus Reviews, Mike said, “I decided that presenting the material in historical order made much more sense than working through it chronologically as it had been published, which is the standard approach with such comics histories. That method then became a way of focusing the content of each chapter.”

Those chapters continue through the battles of the French and British empires before the book moves on to the battles fought as America established itself as a country and into the Twentieth Century with the Great War.

While the book is aimed at an American audience with Americanised spelling throughout, the enormity of the Second World War is covered from the very different perspectives of both American and British comics. With contributions from Bear Alley’s Steve Holland, downthetube’s Jeremy Briggs and ex-Crikey! editor Brian M Clarke, the British comics section shows off the talent involved in such British war titles as Warlord, Battle and Commando to American readers much more familiar with titles such as Star Spangled War or Sgt Fury and His Howling Commandos.

"I hope War Stories will show American readers that there’s more to comics than what’s published by DC, Marvel and other US publishers," Mike explains. "We Brits have also produced some great material as have writers and artists from around the globe.”

The chronological theme continues with Korea, Vietnam, the Falklands and the Northern Ireland Troubles before coming much more up-to-date with Yugoslavia, the 9/11 attacks, Afghanistan and Iraq.

Overall, the book touches on all the conflicts covered by English language comics. “If I have one regret,” says Mike, “it’s that I could not include more material from outside the English-speaking world. Maybe there’s Volume 2 beckoning!!

With a foreword by writer Garth Ennis, who’s war titles are covered in the book in some depth, this is a well researched and heavily illustrated book that covers an all too often ignored area of comics history.

• Buy War Comics: A Graphic History from amazon.co.uk
Posted by John Freeman at 10:04 am