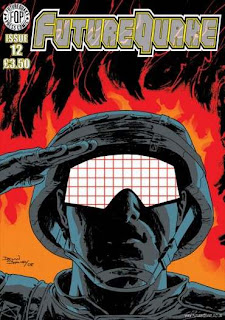 • If you're in London at the weekend, don't forget the The Alternative Press Fair 2009 is on tomorrow, Saturday 1st February. Bringing together the worlds of alternative comics, zines, self-produced art-books, poetry and diy/punk culture for one amazing day, like a great colourful blancmange that you can’t eat. Meet the artists, see their work, buy some if you like it, then relax and enjoy an exciting evening of music, song and melody, starring the Singing Sensation of the Nation, Mr. Trent Miller (& The Skeleton Jive)...

• The February 2009 issue of Thomas Cochrane's Fat Man comic is now online -- a 25 page bumper edition. You can also view it at myebook.com.
Responsible for the death of millions, the mysterious 'Tegel Project' threatens the very core of civilisation. Betrayed by MI5, the Fat Man finds himself caught between the blazing guns of would-be assassins and the blood-red lips of silent movie star Louise Brooks.
Unable to trust anyone and faced with a series of unpalatable choices, he careers madly along the arch of time on the seemingly impossible mission of keeping himself and his lover alive. Read Part Five...

• What is it with Panini UK and their total inability to update their web site properly? Thus, it falls to Al Ewing to point out that Marvel Heroes #3 is now on sale in the UK while the official web site is still promoting #1, the fools. "tt's a giant monster special," says Al, "with my Iron Man story with Kev Hopgood joined by an absolute gem of a Fantastic Four tale by Rik Hoskin and John McCrea, containing what I think might be one of the best Thing moments I've seen all year... It's a beautiful bit of business that turns a fun story into a great one."
(I suppose I should confess I haven't updated my New Comics page lately, either, but then again no-one's paying me to do this...) 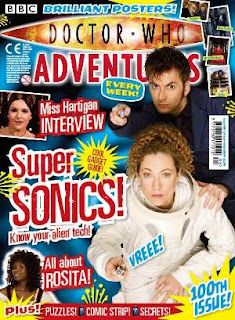 • Doctor Who Adventures #100 is offering 100 prizes in its 100th issue, on sale now, including books, DVDs, audiobooks and toys. The issue also has a special feature about some of the sonic devices in the series – everything from the sonic screwdriver to the sonic blaster - and the comic strip for the issue sees The Doctor and his new friend Heather take a trip to the planet Delquis.

• Discworld author Terry Pratchett has just been interviewed by The Times on Alzheimer's and his best work and notes how some Harry Potter fans have accused him of plagiarism even though his 'school for wizards' has been around for, what, 20 years? "I've had letters from Potter fans, less so these days, mostly from America, accusing me of plagiarism,” he says. When one newspaper “fabricated” a row between Pratchett and JK Rowling - in fact they have met and get on - he received death threats from American Potterites. “E-mails,” he says, “ and very stupid.”

• Fancy yourself as a superhero? InvestigationDiscovery.com has launched Homespun Superheroes, a fun new Flash game designed to develop skills such as memory, observation and response time to help build up "superhero stamina." Specially designed tests will help improve rank and supply your avatar with a hero rating that will help you to master the streets and "clean up crime."

• The trade paperback edition of Leah Moore and John Reppion's four-part Top Cow/Dynamite Entertainment crossover mini The Darkness vs. Eva - Daughter of Dracula is out this week, as is Mike Raicht's Creature Feature #2 from Th3rd Wold Studios, which features a 12 page story called "Imago" written by Leah and John and drawn by 2000AD's P J Holden.
Posted by John Freeman at 12:21 pm