While the UK comics community, and the national newspapers, may have made much of Prime Minister Gordon Brown's appearance in the first issue of Marvel's Captain Britain and MI13, it is unlikely to have raised much interest in Number 10 or in the Brown family home in Scotland. However the Prime Minister's appearance in The Broons in today's issue of DC Thomson's Sunday Post newspaper is much more likely to capture his attention.

As tonight is Burns Night, the 250th anniversary of the birth of Scottish poet Robert Burns, and the beginning of the Scottish tourism promotion of Homecoming Scotland, Maw and Paw Broon have invited Prime Minister Gordon Brown and Scottish First Minister Alex Salmond to join them at their Burns Supper in their Number 10 - Glebe Street that is.
Maw Broon, of course, is Scotland's latest celebrity chef with 2007's Maw Broon's Cookbook and 2008's follow up Maw Broon's But An' Ben Cookbook. Last year at this time the Sunday Post issued the 32 page Broon's Burns Night magazine, which combined Burns Supper recipes and other Burns Night traditions, as a free giveaway. This magazine proved so popular that it was expanded and issued as a 48 page softcover book towards the end of last year by Waverley Books who had so successfully published Maw's other titles. 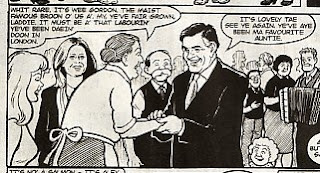 In today's Broons tale, artist Peter Davidson has included Gordon Brown's wife Sarah as well as singer Dougie MacLean whose song, Caledonia, is the official anthem of the Homecoming promotion. The story ends with Gordon Brown and Alex Salmond sharing a drink together, which will no doubt amuse many as in reality there is no political love lost between the two men.
However there are no politics to be had in the story. Indeed Maw is quoted in the Sunday Post as saying, "The only political wranglin' goin' on in oor hame is when Daphne and Maggie want tae use yon hairdryer at the same time. Mebbe we could get some other politicians round to solve the problem. A'body knows there's plenty o' them that specialise in blowin' hot air."
The Broons (c) DC Thomson and Co Ltd
Posted by Jeremy Briggs at 7:26 pm