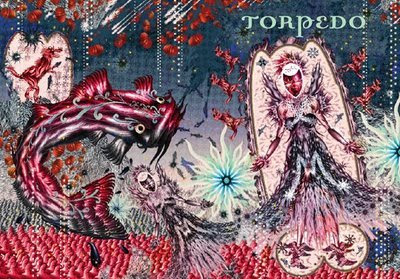 2009 marks the 25th anniversary of the death of American writer Richard Brautigan, whose best known works include his 1967 novel, Trout Fishing in America, his collection of poetry, The Pill Versus the Springhill Mine Disaster (1968), and his collection of stories, Revenge of the Lawn (1971).

Marking the anniversary of one of his favourite writers, Brighton-based comics creator Paul O'Connell is one of several contributors to the leatest issue of the quarterly Australian fiction magazine Torpedo, whose latest offering is a special Brautigan themed issue.

Co-edited, and with a foreword, by Brautigans daughter Ianthe Brautigan, the special issue features Brautigan inspired fiction from 30 writers, a section of Richard Brautigans own writing plus a specially designed envelope containing eight full colour A5 double-sided prints featuring artwork based on his stories, one of which prints is a comic strip by Paul using Richard Brautigan's own text, called 'The Library'.

In Brautigan's novel The Abortion: A Historical Romance 1966, the narrator is the sole employee of a library that collects unpublished and unpublishable books. It's sole criteria is that books must be delivered in person. "A chapter in the novel which I adapted into comic strip form
describes a typical day in the life of the library," Paul told downthetubes, "and the many kinds of
characters who stop by to leave their charming, idosyncratic and bizarre manuscripts and books."

"It's a real privilege to be included in this special edition."

Apparently, the idea for the kind of library featured in the novel proved so popular that it inspired more than a couple of actual real life libraries based upon the same principle.

Other contributors to the magazine include Brian Evenson, Ryan Boudinot, Dan Pope and Caren Beilin, an outro by Radiohead illustrator Stanley Donwood and a cover by Los Angeles-based illustrator Kristian Olson.

• Torpedo is available now to buy from the Falcon vs Monkey website
• Brautigan Bibliography and Archive
A bio-bibliographical archive for Richard Brautigan, his life, and writings
Posted by John Freeman at 4:48 pm