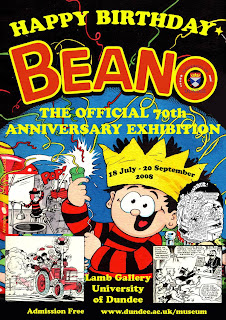 As previously mentioned here, Happy Birthday Beano, the official 70th anniversary exhibition will be running in the Tower Building of the University of Dundee from from 18th July to 20th September 2008. The display will include original artwork from the Beano archives with work on show from Dudley D.Watkins, David Law, Leo Baxendale and David Sutherland.

To tie in with the exhibition and act as its official launch Dr Chris Murray, organiser of the successful Dundee Literary Festival Comics Day at the University, has organised an early evening event on Wednesday 30 July.
Beginning at 5:30pm in the university's D'Arcy Thompson Lecture Theatre, there will be short talks by the exhibition's curator, Matthew Jarron, on The Prehistory of Dundee comics, by Chris himself on The Birth of The Beano and then by comics historian Paul Gravett on The Golden Age of DC Thomson. These will be followed by talks by current Beano artists Laura Howell and Gary Northfield and Beano legend David Sutherland.
The event will then move upstairs to the Lamb Gallery for a wine reception and conclude with a Gallery Talk by Alan Digby, current editor of the Beano, and Morris Heggie, former editor and now DC Thomson archivist.
Entry to all talks is free, but prospective attendees should get in touch with Dr Chris Murray, c.murrayATdundee.ac.uk, to reserve a place. More details are available on his Bebo page.
Posted by Jeremy Briggs at 2:25 pm