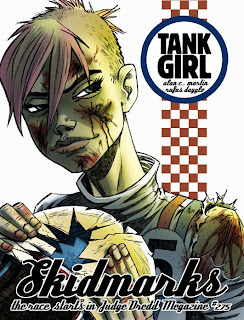 • Artist Rufus Dayglo has posted a message on the official 2000AD Forum revealing the new Tank Girl: Skidmarks series will begin will be making its debut in Judge Dredd Megazine #275.
Meanwhile, Tank Girl - Visions of Booga #3 will be out soon from US publisher IDW Comics. "Go get it!" he demands. "It's definitely the one I'm happiest with!"

• The Daily Telegraph reports that whether alien activity or natural phenomena, reports of UFOs have flooded in this summer from across the UK. Plotted on a map of Britain, the sightings can be seen to stretch from Liverpool to Dover and from Llanelli to Derby. (This is what happens when too many people are allowed to watch Doctor Who).

• Cartoonist Lew Stringer is celebrating 25 years of professional comics work this week. His first work published in a professional comic was in Marvel UK's Eagle Award-winning The Daredevils and the job was a pocket cartoon entitled What If Iron Man Really Lived up to his Name? He recalls he was paid the princely sum of £5 for the cartoon.
"Looking at it now, the style is crude and the gag very lame, but seeing it in print back in 1983 gave me a huge boost to my self esteem. At the time I was on the dole, having quit a dead-end office job, and had been trying to break into comics for a couple of years with no luck."

• As part of British comic magazine Crikey's continuing contributions to the Forbidden Planet International blog, there's a new post on some of the first appearances of Marvel Comics characters in British comics such as Pow!, noting the different layouts of the strips compared with their original US publication and more. 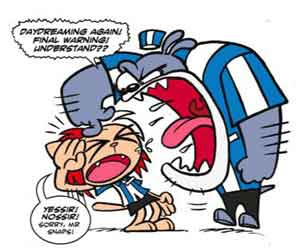 • UK national newspaper The Guardian continues its impressive support for the comics medium with the arrival of cartoonist Laura Howell today, with her new strip The Mighty M, part of the comic section delivered by the team behind The DFC. Most of The Guardian's strips also feature online, available as downloadable PDFs, but unlike the newspaper, your really have to search hard to find the comics page. I suggest you bookmark this link!