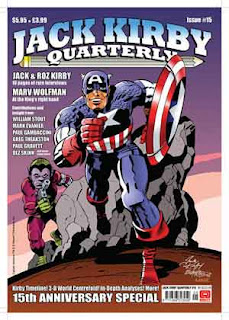 We knew Dez Skinn, former editor of Comics International, Warrior and many more Brtitish comics titles couldn't keep away from good old print journalism forever. His next project is the 15th anniversary special of the world's first-ever magazine devoted to the work of the King of Comics: Jack Kirby.

"When I stumbled across a stash of back issues of Chrissie's Jack Kirby Quarterly magazine, I was very impressed by them," Dez told downthetubes. They're very different to John Morrow's excellent Jack Kirby Collector, they put a greater focus on analysis than art, providing in-depth features, albeit still well-illustrated.

"Half-jokingly, I suggested she might wish to produce it once more, but through my own Quality Communications imprint this time. I was delighted to discover this year would mark the magazine's 15th anniversary and she was keen to produce a special issue to celebrate. (OK, the maths don't work for a 15th anniversary of a magazine with Quarterly in the title only now achieving its 15th issue, but this isn't the real world, this is funny books!)

"With the intention of continuing, should sales justify such, the magazine will sensibly be retitled Jack Kirby Annual from next year."

Could this new magazine mark the start of more Dez Skinn-helmed magazines? Once that printer's ink gets under your fingernails, we know there's know escaping it!
Posted by John Freeman at 8:32 pm

Very cool. I'd think it would sell well in the US as well.