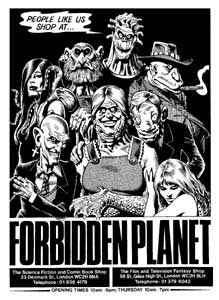 In 1978, Forbidden Planet opened its first store in London’s Denmark Street (better known to some as "Tin Pan Alley") and has been at the forefront of all things science fiction, Fantasy, Cult TV and Film, including books, comics, DVDs and toys ever since. The chain's London Megastore is the biggest shop of its kind in the world and now has eight other stores around the country run by the London-based Titan Entertainment Group*.

To mark this auspicious occasion, FP has decided to find out what have been the most outstanding moments in Sci/Fi, fantasy and cult entertainment over the last 30 years.

All people have to do is enter their suggestion in each category in their online poll. They'll then tot up the results and come up with the definitive lists by the people who know best!

The outstanding moment can only be something that has been released from 1978 onwards, which means you can't cite the intial release of Star Wars way back in 1977 but anything goes from pretty much then on - be it your favourite book, film or TV show.

Who in the Sci-Fi world has made you hot under the collar? And what's been the least scary monster ever? 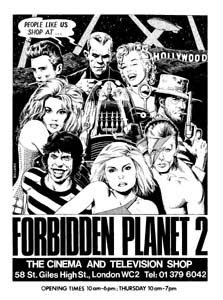 It's easy to take part and they could be in with a chance of wining £300 worth of Forbidden Planet vouchers. All you have to do is go to www.forbiddenplanet.com and vote,

The poll closes on Friday 15th August 2008 and The Top Ten in each category will be announced shortly afterwards.

* "Eight shops?" someon sqauwked from the back... "there's more than that!" For those of you wondering, there are two Forbidden Planet chains, the result of all sorts of company changes and splits over the years. One is based in Scotland and known as Forbidden Planet International and the other is run by Titan, who also run Titan Books, Titan Magazines and the Forbidden Planet web site etc. There. that was simple to understand really, wasn't it? (There's more on this on Wikipedia or read an interview with the London FP's owners Nick Landau and Vivian Cheung)
Posted by John Freeman at 4:01 pm