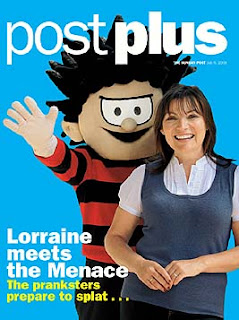 DC Thomson is pulling no punches when it comes to promoting the Beano's upcoming 70th issue, running a two page feature in this week's Sunday Post to promote Wallace & Gromit creator Nick Park's upcoming guest editorship of the birthday edition.

Also interviewed was GMTV presenter Lorraine Kelly, on hand as Dennis splatted Beano editor Alan Digby to help promote the Gnashional Menace Day on 2nd August. The day has been dedicated to practical but harmless jokery which Kelly is looking forward to, and to raise money for CLIC Sargent, the charity caring for children with cancer.

“I love the idea of a Gnashional Menace Day,” Lorraine told Post reporter Mike Stirling. “As soon as I heard about it I was keen to get involved. It’s a brilliant, fun way to raise money for an excellent charity — I think CLIC Sargent do such amazing work helping children with cancer and their families too.

"It’s a great cause to support and playing jokes on each other to raise money has got to be one of the best ideas ever!”

Lorraine’s was also happy to reassure anyone worried that they’ll need to lock themselves away from unruly pranksters on the day.

“This is a great idea which takes us back to more innocent times. Gnashional Menace Day is good family fun — a giggle. It’s encouraging kids to play fun pranks on each other and is so different from the happy slapping type of mischief you hear about nowadays."

While Nick Park has rubbed shoulders with Hollywood greats and enjoyed worldwide success thanks to his many animated creations, he reveals one of his dreams has always been the opportunity to edit his favourite comic.

“It’s such an honour for me to be guest editor for The Beano’s 70th birthday issue," he said. "It’s shown me just how much thought goes into every detail of the comic. I’m an ideas person and I like the fact that there are no limits to the imagination in The Beano."

Acknowledging the many distractions kids now have that might prevent the kind of cover to cover (and back again) reading of the Beano Park engaged in as a child, he remains a firm fan of the title, finding the world of the Beano world both familiar and comforting when he was off school when ill.

“It’s a cosy type of world — it’s difficult to pin down exactly why," he acknowldges. "Even though crazy stuff happens it still seems safe — it’s a place you can trust. It’s the same world that Wallace & Gromit live in."

• The Beano 70th birthday issue goes on sale from 30 July in all good newsagents. The Gnashional Menace Day Kit contains four fun practical jokes, a sponsorship form and loads of top secret tips and tricks to help participants raise funds by FUN-raising!
• For more details on Gnashional Menace Day check out www.beanotown.com
• For information on CLIC Sargent go to www.clicsargent.org.uk