Like its 2007 predecessor, Biff! Bam!! Crikey!!!, the 2008 Comics Day of the Dundee Literary Festival was held at Dundee University and was again organised by Dr Christopher Murray of the university's English Department. While the previous year was a rather academically minded two day 'presentation of papers' on comics and their associated themes, this year was a much more accessible Sunday afternoon of talks by comics creators in a lecture theatre in the university's descriptively, if unimaginatively, named New Teaching Block.

That said, after an introduction by Chris Murray, the day kicked off with writer and university lecturer Roger Sabin handing out about 20 copies of a Superman comic to the 100 or so attendees and instructed the audience to read them so he could lead a discussion about it. The ensuing discussion rather showed which attendees were currently students, and so were used to such things, while the rest of the audience probably wondered why the relevant points raised couldn't have been put over more simply in a Power Point presentation.
Next up was Jim Glen who dug out a black marker pen from his bag, chose a fresh sheet of paper from the flip chart at one side of the room and began to draw - and the audience realised very quickly that they were in for something a little special. As he drew first Dennis the Menace, then Desperate Dan and finally Lord Snooty, he regaled us with light-hearted stories of his more than forty year career drawing, and sometimes writing, for DC Thomson's humour titles including Dandy and Beano. The warm applause at the end did rather suggest that the audience could have listened to him for much longer than his time slot allowed. 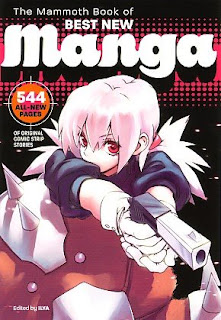 The first batch of talks concluded with an overview of manga titles by artist Ilya, otherwise known as Ed Hillyer, who is editor of the now almost annual Mammoth Book of Best New Manga. His presentation was an introduction to the various styles of manga and how it differs from the more familiar British style of black and white adventure comics. The number of people looking at the manga titles on the bookstall during the ensuing coffee break appeared to show the effectiveness of his talk.
The next section kicked off with the smooth presentation style of the Metaphrog duo, Sandra Marrs and John Chalmers, who discussed the creation of their beautifully produced small press Louis graphic novels. This was followed by Paul Gravett's talk on how comics had covered crime over the years and which tied in with the release of his Mammoth Book of Crime Comics. Paul's encyclopedic knowledge of the subject and easy presentation style opened a window into a section of comics that tends to have been neglected in the past. 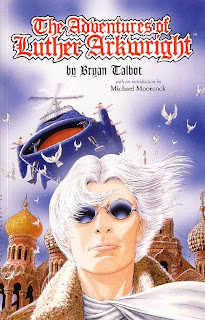 A second coffee break followed with a chance to talk to the various presenters and to get books autographed before returning to the theatre for the key note speaker, artist and writer Bryan Talbot. Bryan talked about the creation of his graphic novel Alice In Sunderland with his enthusiasm for the subject of Sunderland, the surrounding area and its connections with the Alice books shining through. The day concluded with a line up of the presenters being asked various questions and telling the audience of their favourite comics and what they were reading at the moment.
Tying the day into the Literary Festival seemed to have increased the audience turnout compared to 2007, despite the event no longer being free, and certainly the mix of people in the audience was much greater. After the uneven talks of last year, the overall presentation quality was increased this year by having presenters who were used to talking to an audience. Even the book stall in the reception area, which this year was run by Borders, had appropriate titles for sale. Unlike last year when FPI brought an irrelevant selection of US superhero reprint books, this year the audience could listen to a talk and then walk out and buy what had just been discussed, whether it was by Paul Gravett, Ilya, DC Thomson or Metaphrog. They even had American copies of the Art of Bryan Talbot and Bryan's two Luther Arkwright books for sale and appeared to be doing a good trade on them.
Dr Murray and his organising team can be justifiably proud of the day and hopefully will be able to continue in the same vein next year. To quote one of the audience members at the end of the proceedings, "that didn't seem like six hours, it just flew by".
Posted by Jeremy Briggs at 7:19 pm