Posting on the Shadows Facebook page, Kevin announced yesterday that "Shadows will come to an end this Friday (4 January).

"The Sun have decided they would rather have a former comic return to the paper than carry on with Shadows," he explained. "I was only told this news about two weeks ago and have had to wrap up the current story rather quickly. Which is a big pity as I had a lot planned for The Hunted, and future story lines, that I won't get to finish properly now. The Hunted will be ending on page 99, which is roughly 200 pages shorter than what I had planned for this story."

The announcement prompted speculation from fans that the "returning strip" might be football strip Striker, although creator Pete Nash has previously stated he felt the story had run its course. Update: On 7th January, the football strip did indeed return to the newspaper. 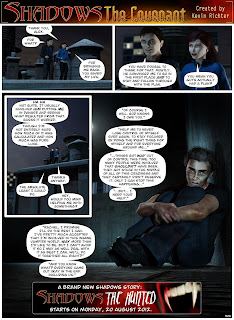 When Striker was dropped from the newspaper in 2009, Nash was also forced to shorten his final story in the newspaper, although as the series' creator he went on to publish the strip online and it found a temporary home in Nuts magazine.

It's been some time since Pete made any further announcements about the comic, despite hopes in 2010 that a new outlet for the story would come to fruition by the end of 2010. Update: However, his persistence now seems to have paid off with a return to the paper where the strip began.

Another strip, fantasy tale Axa, was also dropped mid story with a few strips unpublished and the story was never resolved.

Unlike Striker, Kevin Richter does not own Shadows, so it seems there seems little hope for any further stories at this time, and the story's Facebook page is facing deletion.

"It would be good to carry on with it, if we could get the copyright, but there's probably no chance of that happening," says Kevin. "It is literally more than a full time job creating something like this and the chances of making money on it away from the newspaper is very slim.

Despite the sudden end to the saga, Richtman is keen to thank his fans for their support. "I just want to thank all of you for reading Shadows," he says, "and for your thoughts and comments here on the Facebook page, it really encouraged me and helped me, hopefully, write better stories. I will miss working on Shadows.

"... Comics are what I do though, so I will continue," he insists. "I have many ideas waiting to happen and will be concentrating on them this year. I will of course keep you guys informed. That is assuming you want to read anything else besides Shadows that I produce!"

The Sun also publishes a Wallace and Gromit daily strip, produced by Titan Comics. There is a roster of six writers on that strip - Richy K. Chandler, Luke Paton, Mike Garley, Gordon Volke, Will Dawbarn and David Leach - three artists - Mychailo Kazybrid, Jay Clarke and Sylvia Bennion - and Bambos is the strip's inker and John Burns is the colourist. The strip is lettered and edited by David Leach.