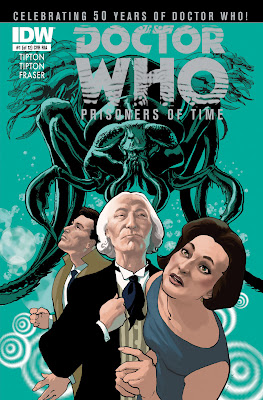 British comic creators look set to be heavily involved in US publisher IDW's Doctor Who at 50 celebrations with Simon Fraser and Lee Sullivan among the artists involved in their 'Prisoners of Time' maxi series, which launches this month.

'Prisoners of Time' will feature every incarnation of the Doctor, as well as a long list of villains, including the Zarbi from the TV story best known as The Web Planet.

The opening issue is being offered with two covers, one by Simon Fraser and the other a photo cover from publicity stills from the original Doctor Who episode, 'An Unearthly Child'.

"It's a 12-issue miniseries featuring all 11 incarnations of the Doctor," co-writer David Tipton told Comic Book Resources. "Each Doctor will be featured in one of the issues."

"And of course, there's a larger mystery spanning the course of the series," added co-writer David Tipton, "one which is set up in the opening pages of issue one, and which will increasingly come to light as the series progresses."

As yet, apart from the Zarbi, the villains who will play a part in the story have yet to be revealed.

As well as the story, each issue will include an essay on the featured Doctor by prominent Who experts. Producer, director and script editor for Big Finish Productions, John Ainsworth provides these for #1 and #2, with Gary Russell contributing to #3.

• Doctor Who: Prisoners of Time #1 written by Scott and David Tipton with art by Simon Fraser goes on sale 23rd January from IDW Publishing.