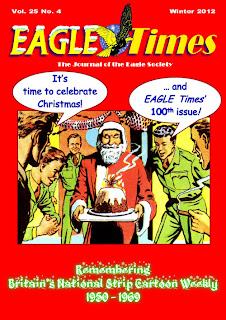 (Via the Eagle Times blog): The 100th issue of Eagle Times, the journal of the Eagle Society, is available now.

The man at the rear of the picture has an obviously intentional resemblance to Dan Dare's creator, Frank Hampson...

In the issue:
• To get a copy, join the The Eagle Society via Annual Subscription to Eagle Times magazine, which is published four times annually. The Subscription rate for 2012 is: UK £27; Overseas £38 (in £s Sterling, please). Postal applications to: Keith Howard, 25A Station Road, Harrow, Middlesex HA1 2UA, United Kingdom.

If you wish to pay by Paypal (to the eagle-times hotmail address below) we request an additional payment of £1.50: eagle-times@hotmail.com
Posted by John Freeman at 3:21 pm