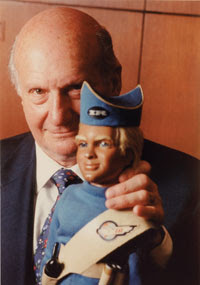 Everybody has heroes. Some people create them.

One man who created them for me as I grew up as a kid in the 1960s was Gerry Anderson, aided by his not inconsiderable team behind the Supermarionation shows such as Captain Scarlet, Stingray and, of course, Thunderbirds. Later, he would continue to thrill with UFO. For others in our industry, Space:1999 or one of his other shows - and there were many - also inspired.

Many of my generation remember not just the shows, but also the inventive merchandising of those childhood favourites, particularly TV Century 21, the weekly comic providing all-new adventures of Troy Tempest, the Tracy family and Spectrum. A title that captured the mood of the technology-obsessed as humankind engaged in a race to reach the moon, realized in 1969. It was a comic I only saw occasionally as a child - it did, after all, cost seven pence! - often given to me by my Grandfather during holidays.

I have only the vaguest childhood memories of his last black and white puppet show, Fireball XL5 - one being the show's launch sequence for Steve Zodiac's spacecraft, the other being Steve and Venus trapped in some kind of ice corridor ass a wall of water headed toward them (Possibly imagined. Gerry Anderson's shows made me imagine a lot). My memory of Fireball is shaped more by the beautifully crafted art of Mike Noble for the show's comic strip in TV Century 21, also drawn by Frank Hampson; far more impressive, in my view, than the show that inspired it.

Stingray - Gerry's fantastical and wonderfully bonkers undersea adventure - I remember more of. Again though, it was a spin-off item - Armada Books' Stingray and the Monster - that drove my enthusiasm for the show, the mysterious 'John Theydon' deepening the mythos with an engaging sea monster battle. Mr Theydon would go on to develop a number of Thunderbirds stories, novels which, nestled next to other SF in bookshops, would help to send me off exploring other fantastic worlds, created by the lkes of Arthur C. Clarke, Isaac Asimov, Poul Anderson and Ray Bradbury, to name but a few.

Thus, Gerry Anderson's creations, translated to comics and books, helped shaped my continuing interests today, as did many SF authors, Doctor Who, Star Trek and CS Lewis and Tolkein.

In that sense, then, the Anderson creations are an integral part of my creative DNA, for which I make no apology today, although being what's now known as a 'geek' earned me my fair share of brickbats at school.

And nothing is more integral to my DNA than the sense of wonder and enjoyment Thunderbirds inspired as a child, from its fantastical life saving machines to its engaging characters like Parker, the villainous Hood and the demure Lady Penelope. (Look - I was six when the show began. We weren't 'sophisticated' as it's claimed modern children are, although the successful 1992 revival of Thunderbirds suggests this is not as true as some cynics would have you believe).

Like many, I was caught up in Thunderbirds, thanks to Gerry Anderson. Not just in the show itself. My parents secured a precious 'data sheet' and two photos of both Thunderbirds craft and the Tracy family for one birthday. My mum baked me a Thunderbird 3 birthday cake. Like kids today caught up by Transformers, Ben 10 and other series in later decades, I was an avid fan at an early age thanks to the series.

Gerry Anderson not only inspired with the shows he produceed. He and his TV creations - also reimagined in comics and books - engendered something in me that has shaped my life as a comics creator and story writer from an early age.

Strangely, for all my work on licensed titles - Doctor Who, Star Trek, Babylon 5 and Star Wars, to name a few - I have never worked on an official Gerry Anderson project. I met him just once, briefly, at a Forbidden Planet signing. I was glad I was finally able to thank him personally for the shows that provided so much fun and thrills as I grew up.

Overnight, many other comic creators have also enthused about his work. Artist Chris Weston recalled his love of Thunderbirds: writer and editor Marcus Hearn, who has been workng hard for several years to bring us collections of TV Century 21 and Countdown comic strips described knowing Gerry as a privilege.

Warren Ellis, who revealed he once showed Buffy the Vampire Slayer and Dollshouse creator Joss Whedon the title sequence of Joe 90 and he thought he was trying to drive him mad.

"If you grew up weird in Britain between the 60s and the 80s, Gerry Anderson was at least partly why," he commented on Twitter, citing the title sequence of UFO as an example. A sentiment I happily share.

Not every show was a success. Gerry's life is full of roads not taken, for a variety of reasons. His creations have, occasionally, been hijacked by people with no empathy whatsoever for the original, and those recreations have proven spectacular failures. The treatment of his own CGI revival of Captain Scarlet by ITV was woeful and wholly undeserved, but reflects the idiocy of many managers working in TV programming today.

(You know the ones: they're the kind with no respect for creatives, who squeeze the credits in favour of an advert so modern children will possibly never know the names of the creators who inspire them with The Witches Broom or Merlin).

But the shows that were a success, for me, positively shine, and were an influence on many far beyond their production years, on both those who watched them and those who helped create them alongside Gerry.

The strings are broken. An amazing soul flies free.

Thank you, Gerry, for so many wonderful, inspiring creations. You were and will always be an inspiration to many and you will never be forgotten.

• Please consider making a donation to the Alzheimer's Society in memory of Gerry via his son Jamie Anderson's Just Giving Page:justgiving.com/Remembering GerrryAnderson