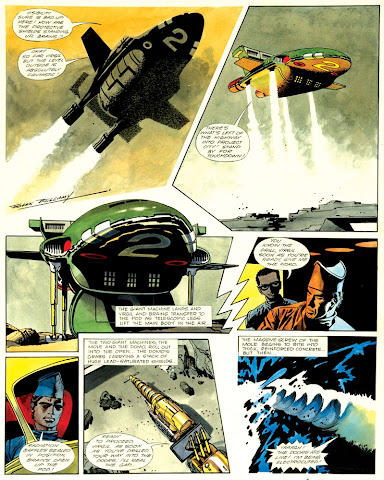 My sorrow at the passing of Gerry Anderson has been eased a little by the glowing tributes that appeared across the British media. The television and newspaper obituaries presented a warm, if understandably reductive, view of his remarkable career.

However, even those who only knew Gerry slightly would have winced at the articles that described him as a ‘puppeteer’. Many of Gerry’s best known shows did indeed feature puppets, but for Gerry this was entirely incidental to their appeal. The worlds of Stingray, Thunderbirds and Captain Scarlet were produced in miniature because that was the only way to realise Gerry’s epic vision on a film or television budget.

Away from film and television, Gerry’s concepts knew no constraints. His production company AP Films and its successor Century 21 launched a number of successful spin-offs, including record and publishing divisions where his characters could roam freely, unhindered by the puppet wires and door frames that compromised his perfectionist zeal.

The publishing division was by far the most successful, and the jewel in its crown was a title that would become one of the best loved and most successful adventure comics of all time. 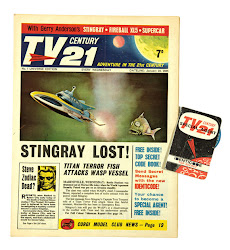 Gerry devised the unusual tabloid format for TV Century 21 himself, maintaining that it should be distinctive from all its competition. Gerry’s format and television concepts, combined with the editorial guidance of Alan Fennell and the contributions of some outstanding artists proved unstoppable.

The first issue of TV Century 21 was published in January 1965, and when Gerry discovered that its 750,000 print run had sold out he remembered feeling like “the happiest man on earth.” By 1966 the combined sales of TV 21 and its sister comic Lady Penelope were estimated at 1.3 million.

There was little time for Gerry to dwell on this incredible achievement. He returned to a giddy schedule of film and television production, monitoring his publishing company’s endeavours until it wound down in the early 1970s.

Nearly 40 years later, I suggested to Gerry that the time had come to re-examine the archive of artwork, and to share it with a new audience. Together with my friend and colleague Chris Bentley, I pointed out that artwork of this quality had the potential to look even better than it had looked on its original printing. Gerry was probably the least nostalgic man I have ever met, and it took a few moments for him to recall the details of the publications he had helped to create back in 1964.

“This material really is some of the finest ever seen in British comics,” I insisted.

Gerry smiled, and feigned surprise that he needed reminding. He looked at me and said, “Well of course it was!”

Gerry inspected the surviving artboards and the memories came flooding back. As we admired the work of Frank Bellamy, Mike Noble and Ron Embleton he became enthused about the project. With Chris Bentley heading a dedicated team of digital restoration experts the first volume of Century 21: Classic Comic Strips from the Worlds of Gerry Anderson was published in 2009. Gerry threw himself into publicising the new books, and remained in close contact over future volumes.

Gerry’s health was declining when the fifth volume, Menace from Space, was prepared in 2011. I explained that for this latest instalment we would be improving the binding and paper, and printing exclusively in hardback. “I want this to look as good as possible,” I said to him, “even if it means putting quality before commercial considerations.”

Gerry was delighted with the result, and added Menace from Space to his Century 21 collection. The last call I received from him was an optimistic enquiry to see “how things were getting on with the comic books.”

We will continue to work with Gerry’s family and his company, Anderson Entertainment, but we are all so sad that we will do so without the guidance of the man we regarded as our editor-in-chief. To rediscover, restore and represent these strips was a wonderful adventure. And to do all that with Gerry’s blessing made it a privilege.

• Marcus Hearn is the publisher of Century 21: Classic Comic Strips From the Worlds of Gerry Anderson

• Please consider making a donation to the Alzheimer's Society in memory of Gerry via his son Jamie Anderson's Just Giving Page: justgiving.com/RememberingGerrryAnderson