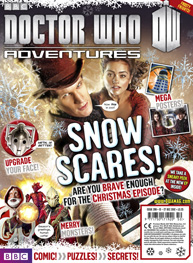 The title reaches its landmark 300th issue this week.

Described as "the ultimate magazine for kids that are crazy about monsters, aliens and that top Time Lord, the Doctor!" each weekly issue of Doctor Who Adventures comes "bursting with beasts, brain-teasers and big Who news".

Sadly, there's little emphasis in its marketing for the comic strip element of the title, although it is mentioned, the iTunes promo mildly enthusing: "Follow the Doctor’s adventures as he battles aliens, saves worlds and tries out new hats..." I have to say I find this a little disappointing.

However, if it's brain teasers, behind-the-scenes info (although we'd argue Doctor Who Magazine was by far your best port of call for that) and finding out a Dalek’s weak spot, how to knock out a Sontaran or survive a Weeping Angel attack - then DWA is for you. 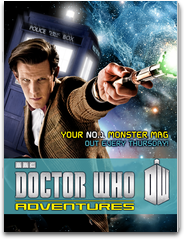 That said, given the physical title's free Who-related gifts - some of which have been rather cool - we'd suggest this might be a title that's still got the edge when it comes to news stand presence.

A three month app subscription costs - £22.99 and single issue copies are also available within the App. The subscription will include the current issue if you do not already own it and subsequently published future issues. Payment will be charged to your iTunes Account at confirmation of purchase.

• More about the app on iTunes