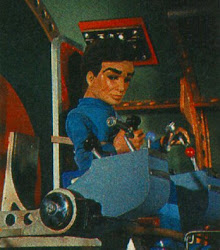 When we lose a personality of any kind, there is always a outcry for this loss, but in this case the loss is so much more personal to an entire generation of adults and children alike. Gerry Anderson, who passed this month, was and will remain the Walt Disney of United Kingdom.

He built his career from the ground up, struggling to get a foothold with no contacts in the film industry. He was, in the best sense of the term, a self made filmmaker, and as such he was instrumental in gathering a crew of such immense talent that their work resonates at full strength to this day.

From a tiny studio, Century 21 Productions produced adventures in the best traditions of a boy's own adventure annuals with its unique British charm and design. The magical and hypnotic space age craft brought all of us to the edge of our chairs.

This complex group of worlds were linked by the beautiful TV Century 21 comic pages, with artwork and storytelling that was and is to this day in step with the impressive nature of the shows each strip mirrored.

With the addition of Dinky's Die Cast range the craftsmanship that made England great was front and centre in every outing for the golden area that was Gerry Anderson's reign as the king of British children's television.

Gerry Anderson broke so much new ground in so many areas it will now be almost impossible in the future of children's television not to walk in his shadow, a legacy that is not I can almost say with total certainty ever never be equaled in it's diversity again.

He was the first to pull together all aspects of marketing for television, with his publishing division and a recording unit for children's albums TV21 Toys, fancy dress, sweets, ice lollies and an amazing stand alone Project Sword space toys line.

Anderson merchandising provided income to a whole generation of British workers. This was no flash in the pan operation... and for all of this, production on these shows had a budget that was not even close to the live action fare from ATV.

Ironically, ATV and all its owners have profited above and beyond even Lew Grade's expectations for these shows. I'm sure he would have ordered another 32 episodes of Thunderbirds had they understood the vast returns it was to continue to generate to this day.

You see, Gerry was a leader strong and with a sense of what he wanted from his creations, in his office with monitors watching the progress on his stages in order to get these complex children's film to the screen wielding the producers power with pure skill.

For myself, I loved these shows - all of them - and I played with the toys and read the comics and watched them and continue to, as they are ageless and timeless in so many ways. Ttheir charm is beyond a doubt as the next group of children will soon find.

And to this day, all of us involved in merchandising and licensing of classic television look to Century 21 productions and marvel at the vast scope of what was produced and accomplished ..it was such a uncommon feat of brilliant marketing unequaled to this day.

So we have lost a master of our childhood day dreams in Gerry Anderson, yet in one sense he will be with us in so many levels for all time.

So thank you Gerry, for showing us the way and raising the bar so high for the future of great British Television.

• Peter Greenwood, whose numerous licensing credits include a series of Thunderbirds-inspired Kit Kat adverts for Australian television, is currently working on the retro-merchandising of TV comedy My Favourite Martian, which was also a strip drawn by Bill Titcombe for TV Century 21. A digital collection of the strips is in the works for 2013

• Please consider making a donation to the Alzheimer's Society in memory of Gerry via his son Jamie Anderson's Just Giving Page: justgiving.com/RememberingGerrryAnderson