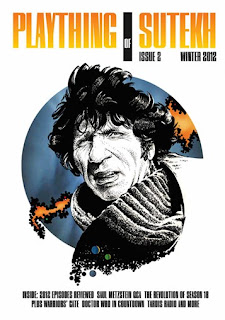 The new issue of Doctor Who fanzine Plaything of Sutekh, edited by Richard Farrell and John Connors, is now available to order. Featured in the 40-page, colour covered A5 fanzine are:

Five Star! A look at 2012's new episodes, which saw the return of the Weeping Angels and the departure of Amy and Rory. There is also a short Q&A with director Saul Metzstein.
Coming Of Age: A look at Season 18 when Doctor Who got told to grow up by new producer John Nathan-Turner.
Opening The Gate: David Rolinson dodges a few Gundans to unravel one of Season 18's finest stories, Warriors' Gate.
Tardis Radio: Oliver Wake looks at the untransmitted pilot radio episode featuring Peter Cushing.
Strip For The Doctor: The Doctor materialised in the pages of Countdown comic in the early 1970s. Richard Farrell looks at the work of Harry Lindfield and Gerry Haylock on the Doctor Who comic strip and examines their influences and source of reference.
Secret Who: Time to dust off the oil lamp as a fresh look is taken at 1974's Death To The Daleks.
DWDVD: John Connors reviews the recent DVD releases Ace Adventures, The Greatest Show in the Galaxy and The Ambassadors of Death.

Email ThisBlogThis!Share to TwitterShare to FacebookShare to Pinterest
Labels: Doctor Who, Fanzines, Plaything Of Sutekh