On the trail of Erin Starfox 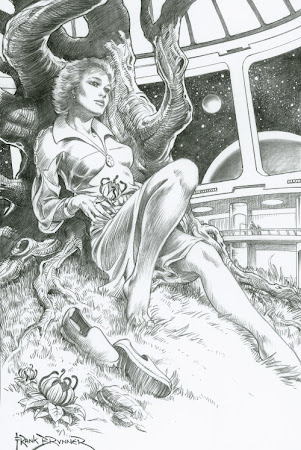 "It's not a comic or graphic novel exactly, but it shares some elements of that form," Will told downthetubes, "and some of the folks who worked on it also toil in the comics field, so there might be some interest from the comics community. Some of the writers and artists are British, others are from the USA and Australia."

Written by Will along with Simon Guerrier (writer of Doctor Who and Professor Bernice Summerfield stories), Tessa Schlesinger and others, with art by Frank Brunner (Marvel Comics artist of Doctor Strange and Howard the Duck), plus Carolyn Edwards, Marcus Jenkins and others, the book explores life and relationships in the far future.

"Erin appeared in my mind one day and I haven't stopped writing about her since," Will says. "She's a multifaceted character with wit and charm and love of life. Her stories are timeless and endless, and the world (the universe) she inhabits abounds with wonder and delight, and is a joy to explore in words and pictures.

"The book was inspired by stories that influenced me as a reader such as Home From The Shore by Gordon R. Dickson (writer) and James R. Odbert (artist); Dan Day's illustrated versions of the Sherlock Holmes stories; Gil Kane's Blackmark; and Jim Steranko's Chandler graphic novel, and other works of visual literature."

Will is a published author and artist, with experience as a magazine and book editor. "I know the steps necessary to take a project like this from start to finish, " he says of the project. "I've done it before. The first and most important challenge I faced with this project was coming up with something different, something worth publishing.

"I thought long and hard for a couple of years, let various ideas percolate around in my brain. When the characters and concepts coalesced, I wrote a Writer's Guide and then invited other writers, and artists, to contribute to the saga. The positive response from them, plus the positive response I got from speculative fiction fans when I took the Starfox concept to SF conventions convinced me that Starfox was something that should be pursued.

"I raised the money to pay the writers and artists for their work, then set about editing the manuscript. Once I was sure that we really had something, I began looking into options to get the book printed and published. A friend of mine, who had successfully funded her book via Kickstarter, suggested I give it a try. Starfox has been a group effort practically from the start, so crowdfunding seems quite appropriate."

"I believe in the message of hope and promise in Starfox," enthuses Terry Brussel, co-founder of Live The Dream (a Los Angeles area sci-fi group), "and believe that message could be as important as the message in Star Trek. Polyamorous civilizations, human drama, great characters, amazing stories, beautiful illustrations; Starfox has it all."

• The Kickstarter page is here: www.kickstarter.com/projects/2049996496/erin-starfox