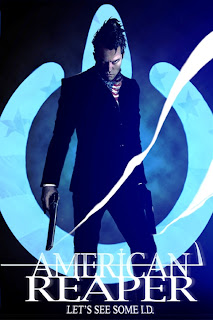 (with thanks to Pat Mills, via Matt Badham): American Reaper, by Pat Mills and Clint Langley, starts running monthly in Judge Dredd Megazine from 12th October 2011.

Pat says it's a dark science fiction thriller about future cops - known as Reapers - hunting down criminals  who carry out illegal identity transplants.  With the digitisation of consciousness, the old, the sick and the rich are able to occupy the bodies of healthy teenagers and enjoy a new lease of life.

There are even controversial plans to legalise ID transplants, with young prisoners on Death Row paying their debt to society by "donating" their bodies to the great and the good.

Produced by Repeat Offenders Ltd - a company formed by Pat, Clint and producer Jeremy Davis - and optioned as a movie by Xingu Films (producers of the superb Moon, and A Guide To Recognising Your Saints), Pat and Clint have produced a cinematic graphic novel series, and Pat feels Clint has surpassed himself on the art fron for this project.

The strip includes advert extras by Fay Dalton (winner of the 2010 Pickled Ink agency's Pickled Award, who's also working on the graphic novel Party Girls), featuring the Reapers' sinister Stop & Scan laws and the mysteries of hologram download dresses that are the height of teenage fashion in 2062.

Xingu says the film version of American Reaper was brought to them as a short pitch from Pat  with some sample art from Clint. "Immediately captivated by the exciting premise, and the exceptional track record of the creative team involved, Xingu came on board not only to commission a screenplay, but also to raise the financing for the graphic novel itself. A departure for our company, but another sign of our flexibility when it comes to how best to get the stories we believe in made."