Ron Jobson Artwork Up For Auction 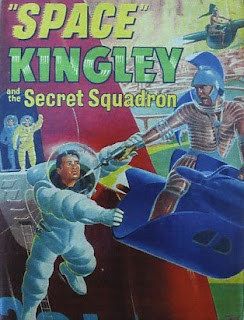 Ron Jobson is not that familiar a name to British comics collectors as he produced very few comic strips in his time, but mention the character of Captain "Space" Kingley to readers of a certain age or collectors of 1950s annuals and you tend to get a remarkable reaction.

Between 1952 and 1954 Sampson Low published three Space Kingley books all in annual size and format despite the character not actually appearing in any weekly comic. Kingley was one of the multitude of Dan Dare clones that were created by many publishers to cash in on the popularity of Eagle's spaceman. The only one to really approach the artistic excellence that was displayed each week in Eagle was Space Kingley and Ron Jobson was the artist who produced the vast majority of the artwork for the three books and four Kingley jigsaws that were released. His career was covered by Norman Wright and David Ashford in Book and Magazine Collector issue 320.

In addition to Space Kingley Jobson worked on may other subjects from 1950s children's picture books via 1960s Matchbox car boxes and 1970s Airfix boxes and instructions to 1980s aviation and space reference books. From a science fiction perspective he did the painted covers for the hardback versions of Charles Chilton's Journey Into Space novels and as well as some of the hardback covers for EC Elliott's Kemlo books. 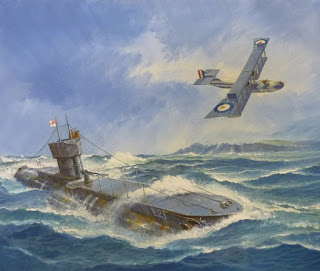 Born in 1923 and called-up to wartime serve with the Royal Engineers and the War Office, Jobson retired from commercial painting quite some time ago but continued painting for pleasure until only recently. Twenty of these more recent paintings, mainly depicting military aircraft and including this lovely one of a World War One Royal Navy E Class submarine with a flying boat, are being auctioned by Aston's Auctioneers and Valuers of Baylies' Hall, Tower Street in Dudley on Saturday 15 October 2011 as part of their Toy Auction.

There are more pictures of all twenty of the Ron Jobson paintings to be auctioned, as well as details of the auction, on the Aston's Toy Auction blog.
Posted by Jeremy Briggs at 7:00 am