Turf Sequel in the works? 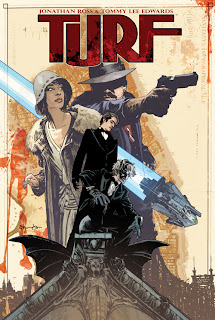 Bleeding Cool reports that Jonathan Ross and Tommy Lee Edwards are considring a sequel to Turf, which was published in CLiNT in the UK and has just been releasd in a smashing hardcover edition by Titan Books.

Jonathan Ross announced that the pair are considering a sequel to Turf, this time set in the 1940s, during a signing for the new book in a London Waterstones.

Ross, who wrote the vampires, mobsters and aliens comic book set in 1920s America, already has a couple of other projects in the works with Edwards, including a retirement superhero comic called The Golden Age, and a racing comic called Speed Trap.

Ross recently outlined how Turf came to be written when he found himself "between jobs" after leaving the BBC and he finally had the time to do what he'd always wanted – write his own comic. Writing for The Guardian, he explained his lifelong love affair with masked men and caped crusaders.

While delighting in the comic form, he also admitted how hard he found it to write the comic.

"I've come to the conclusion that comics are a bit like golf, or Susan Boyle, or threesomes," he said. "You can find large sections of the population who can't get enough of that kind of thing, while the rest of us just don't see where the fun is supposed to lie. But when done right, for me, no other entertainment form can match the beautiful synthesis of hand-crafted art with lovingly chosen words. And as I discovered when I wrote my first comic book last year, in collaboration with Tommy Lee Edwards, less is most definitely more.

"'Newspaper headlines written by poets' was the description that the great Dennis O'Neil (Batman, Green Lantern, Wonder Woman) used when asked to describe the art of writing for comics, and it's as good a guideline as any I've encountered."

• Read the full article by Ross on The Guardian web site