Dan Dare in the spotlight of new Judge Dredd Megazine 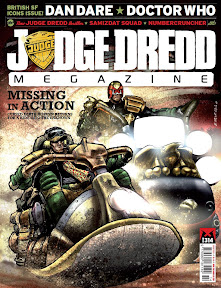 As well as some great comic strip, the latest issue of Judge Dredd Megazine, on sale tomorrow (Wednesday 17th August) features two mammoth features by downthetubes occasional contributor Matthew Badham on the history of Dan Dare and the new Doctor Who in Comics exhibition at London' Cartoon Museum.

And if all that - including a potted history of Doctor Who - wasn't enough for you, how about an interview with Brian Azzarello (by Joel Meadows), film reviews and a bagged reprint: volume two of Mercy Heights by John Tomlinson, with art from Lee Sullivan, Trevor Hairsine and Neil Googe?

Go, you know you're tempted. Get down to your local newsagents and grab a copy!

• Read our review of the Doctor Who in Comics exhibition by David Baillie
Posted by John Freeman at 4:00 pm

Nice work if you can get it!