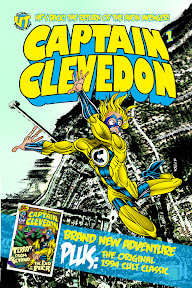 Kev F. Sutherland is the latest creator to join a number of talents who are publishing what I can suppose can be described as 'hyperlocal comics' - titles with a strong connection to one part of the UK, available, for now, in a limited number of 'local' outlets.

We plugged CDComics, whose focus is Sheffield, earlier this month - and there are plenty of examples of titles whose identifiable setting should have helped sales, such as Harker from Ariel Press, a detective story that's had beautifully visualised stories set in Whitby and London.

Captain Clevedon No 1 features a brand new 24-page comedy adventure of Clevedon's own superhero -- plus the original 1994 debut story, reprinted for the first time.

"Captain Clevedon's the world's most local superhero, with the world's smallest distribution network," says Kev. "Get it while it's hot.

"Okay, Forbidden Planet have taken 50 copies. But apart from that, it's a local comic for local people, we'll have no trouble here!
Interested comic fans will have a chance to get it next weekend, 27th August, at the BC 2011 comic convention in Birmingham - but before that, and throughout the summer, you can get it in Clevedon at the following local outlets below for just £1.99.

• Captain Clevedon Facebook Page
Posted by John Freeman at 9:55 am