Every now and again Cinebook translate a Franco-Belgian bandes dessinee into English that isn't, like the vast majority of their titles, part of an ongoing series. Written by Jean Van Hamme and illustrated by Grzegorz Rosiński, the team behind the Thorgal series, Western is a one off story originally published in French in 2001 and set in Wyoming over a number of decades beginning in 1868.

Ambrosius Van Deer has travelled to Fort Laramie with his young daughter Cathy to meet Jess Chisum who claims that he has found Van Deer’s missing nephew Edwin who had disappeared after his family was killed in an Indian raid years before. However the meeting is a set-up to extort money with Jess Chisum's brother Nate pretending to be young Eddie and, as it descends into gunfire, only the two children, Cathy and Nate, walk away. 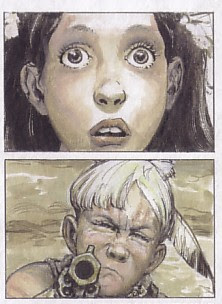 Years later Cathy is the owner of a large cattle ranch while Nate, having lost an arm due to the gunfight, is surviving on odd-jobs and his marksmanship. After returning home and, by chance, saving Cathy's life during a bank hold-up, she employs him to protect the ranch not realising his part in the shooting of her father. Nate then decides once again to pretend to be her missing cousin Eddie.

We may be more used to his James Bond style antics of Largo Winch or the sword and sorcery of Thorgal, but this shows that Jean Van Hamme can really turn his pen to anything and make it work. From the short sharp gunfight sequences to the languid passing of time in others, Western is a richly told story that provides a lead character in Nate Chisum who is both sympathetic yet will stoop to deception to improve his life. 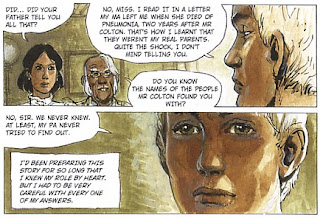 For all that this is a one off book it actually feels quite episodic especially since Rosiński provides two page "centrespread" oil paintings every ten pages or so throughout the book. There are five of these taking up ten of the story's 62 pages and they are wonderfully moody, often tying in with a pause in the narrative. His main story art is done in muted sepia-like colours with painted backgrounds that does much to set the tone for Van Hamme's tale of death and deception.

If you have never read a Jean Van Hamme story before then this is an impressive one to begin with and Grzegorz Rosiński's artwork for it makes it a delight to look at. So if you are looking for one Van Hamme book to sample having become weighed down with Alan Moore's heavily referential style or Mark Millar's high speed action and brutality, there is no need to worry about the back story from previous books or how more volumes there is to come as Western is a gem of a one-off book that shows just how good Franco-Belgian bandes dessinees can be.

There are more details about Western on the Cinebook website.