Doctor Who and Comics at The Cartoon Museum 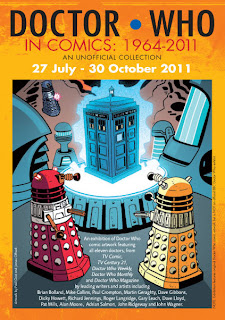 David Baillie reports on the opening of the new Doctor Who show... (no, not the TV show, that's not back until the end of August. Do keep up...)

I’ve been in love with London’s Cartoon Museum since I saw an incredible exhibition of Heath Robinson’s implausible fantasy inventions there in 2007. Ever since then, whenever a friend or fellow comic creator visits from out-of-town I try my best to schedule in a visit to this fine gallery. I also make a point of catching every exhibition it hosts. There have been some fabulous ones and the latest is no exception.

Running until the 30th October, Doctor Who in Comics features a collection of art drawn from every era of our favourite Time Lord’s comic adventures.

Visitors are first greeted by an almost life size Usual Suspects-style depiction of all 12 generations of The Doctor (including the non-canon Peter Cushing) by Lee Sullivan and a handy morphing incarnation guide on the telly by resident cartoonist Stephen Merchant. Following the suggested route (which was difficult on the opening night due to the sheer number of excited visitors) you’ll then be treated to pages from the 60s and 70s which originally appeared in TV Comic and TV Century 21, before graduating to material from Doctor Who Weekly/Monthly (which started in 1979) and then relative newcomers like Doctor Who Magazine (as it is now), Doctor Who Adventures and American publisher IDW’s Doctor Who title.


Picking my favourites from among the many artists featured would be a nightmarish task, but I’d recommend ensuring that you’ve left enough time to marvel at the glorious constructions and linework of Frank Bellamy (probably most famous for his Eagle comic and Thunderbirds work). It’s the first time I’d seen a Bellamy original and it raised the hairs on the back of my neck. I also never tire of seeing the work of one of my favourite cartoonists, Paul Grist – who has a couple of pages from more recent Doctor Who adventures on display. I could almost repeat that last sentence wholesale, replacing Paul Grist with Roger Langridge – as I’m just as enamoured with his work.

The great thing about The Cartoon Museum is the opportunity it provides to get up close and study the work of great comic artists in a way that just isn’t possible with a printed page. In my opinion, seeing Grist or Langridge’s work with blue pencils, whiteout and the odd fingerprint constitutes a comics masterclass all of its own.

Other highlights include pages and illustrations from Adrian Salmon, Dave Gibbons, John Ridgway and David Lloyd (who has a page from a story written by his V For Vendetta collaborator Alan Moore, if I’m not mistaken).

It was great to see so many comic creators in attendance at the opening. I noticed Oli Smith and Tony Lee (two writers currently embroiled with the good Doctor in comics, prose and radio) proudly spotting art from their own stories and many others were heard rattling off tales of their own brushes with Gallifreyan greatness.

One of the reasons that Doctor Who is so well-loved, and translates so readily to almost any media, is that the character is a fantastic story engine, capable of inspiring and generating adventures, yarns and myths faster and more consistently than almost any other fictional property. This exhibition is a great testament to that.

The Cartoon Museum is on Little Russell Street. Please visit their website for other info and details of special events related to this exhibition – including upcoming talks with Dave Gibbons, Pat Mills and Scott Gray.

David Baillie is a writer and artist for comics and television. Working mainly from his East London back garden he has produced work for 2000AD, Judge Dredd Megazine and Teenage Mutant Ninja Turtles. He might have no hair but he does have a hammock in his aforementioned back garden. 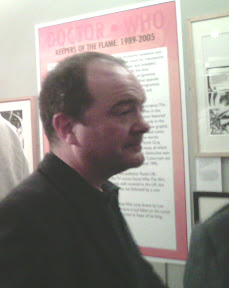 
All photos courtesy David Baillie. All Doctor Who material is © BBCTV © Doctor Who Magazine/Panini UK

Email ThisBlogThis!Share to TwitterShare to FacebookShare to Pinterest
Labels: Doctor Who, Doctor Who in Comics, London Cartoon Museum