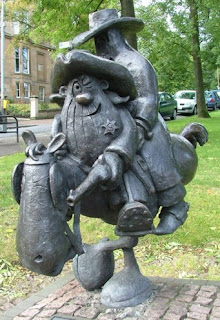 (Updated with GI Bride pictures and extra information): I've been discussing the ephemeral nature of newspaper strips and newspaper strip characters with friends this week, so it seems apt that my attention was drawn to a character and artist whose many fans who are clearly determined should never be forgotten.

Most Glasgow residents know about this statue in Kelvingrove Park - but outside of Glasgow, some comics fans may be unaware of the comic characters it's based on has worldwide cult status.

"Lobey Dosser" was a strip by Partick-born Bud Neill, which ran in the Glasgow Evening Times between 1949 and 1955. Capitalising on the interest in Westerns of the time - and an outlet for the artist's childhood love of westerns - it's the surreal adventures of the Sheriff of Calton Creek, a township in the Arizona desert populated by Glaswegians.

"Lobey Dosser" and his two legged horse (yes, you read correctly, two legs) "El Fideldo" or "Elfie" for short were regularly pitted against his arch nemesis, the forever black masked "Rank Bajin" (a right bad one in the Glaswegian vernacular). With a villain named that how can you go wrong?

It's a funny and at times surreal strip with many well-known characters besides Lobey, including the G.I. Bride - who frequently featured in Bud's pocket cartoons, and became a long running character in the Lobey Dosser series.

The strip was extremely popular with Glaswegians in its day (and continues to be), merging the adventure style of the silent era western movies with traditional Glasgow stage humour, particularly pantomime. The outrageous puns and surrealistic drawings have endured over time and now attract a cult following. 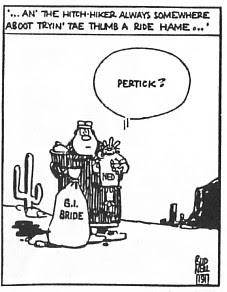 The G.I. Bride was always found standing in Arizona with her "wean" in her arms (her baby, prophetically called Ned), invariably trying to thumb a ride back to Scotland with plaintive cries like "Ony o’ youse blokes goin’ the length o’ Pertick?" or simply the plea: “Pertick?”. Like many real-life Scottish women of the time, she had married a GI and followed him to America, only to discover disappointment in the land of plenty.

Neill, who died in 1970, was a regular theatregoer, and this character was probably inspired by Tommy Morgan's popular stage character, Big Beenie, the G.I. War Bride. The popularity of the Glasgow stage comedian's pantomime-style parodies of the city's culture was not lost on Neill, and was to influence his best known cartoon strip.

Funded by public subscription, the Lobey Dosser two-legged equestrian statue created by sculptors Tony Morrow and Nick Gillon in Woodlands Road as a tribute to Neill during Glasgow’s year as European City of Culture in 1990 (although some sources say it didn't actually get put in place until 1992). 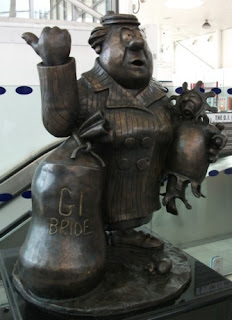 Earlier this year, commuters at Partick Interchange, the rail/underground/bus station, found themselves greeted by a companion statue of the GI Bride, a work the Evening Times reported had been scheduled to return to Partick in time for the Homecoming celebrations in 2009, but her arrival was much delayed.

The newspaper reported that Colin Beattie, publican and patron of the arts, organised and financed the GI Bride project with support from Strathclyde Partnership for Transport.

“I think Bud Neill might have been amused at the GI Bride finally making her journey home to an integrated transport hub in Partick," he said. “I hope it will bring a smile to the millions of people who will use the station each year.”

Randall also charted Bud's other work in books such as Bud Neill's Magic!: A Collection of Bud Neill's Pocket Cartoons.

"The cartoon strip is an ephemeral creature and it is precisely this hit-and-run quality which sorts the wheat from the chaff," notes Ranald of the strip in his introduction to Lobey's the Wee Boy!. "Prosaic and glib cartoon art is consigned along with yesterday's newspaper, to the bin and oblivion; the few great strips lodge themselves in the public's psyche.

"A decade after Lobey's last ride into the sunset Bud was still receiving a steady drip of global correspondence from the little sheriff's aficionados offering what amounted to substantial bribes in return for copies of the scarce books reproduced here. And four decades later the Dosser admiration society flourishes-a testament to the enduring popularity of Bud Neill's Indian ink cowboy character."

• Other comics related statues in the UK -

Desperate Dan, Minie The Minx and Dawg in Dundee

Giles' Grandma, Vera, the Twins and Butch the Dog in Ipswich