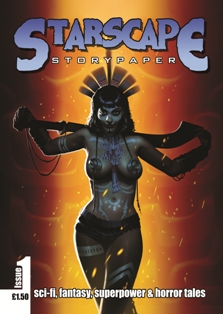 Longtime British indie publisher and comic creator Chris Smillie has announced the launch of the Starscape storypaper, just part of his comic projects that can be found at Starscape Online. With a cover from 2000 AD artist Alex Ronald, the first 50-page issue features work from a range of creators that includes Matthew Soffe and Dustin Parr.

"After a long time in planning, I'm pleased to announce the long-awaited return of the storypaper (or, if you like, an updated penny dreadful)," says Chris.

"If you don't know what these are, have a look at the Storypaper link on http://StarscapeOnline.com for information and downloads of a past penny dreadful (featuring Spring-Heeled Jack) and storypaper (with Sexton Blake).

"Starscape Storypaper is an update on these, such as Hotspur, Union Jack and The Marvel.  Basically, it's an A6 pocketbook of around 50 pages (very handy for the train or bus) of the sci-fi, fantasy, superhero and horror genre.  The pocketbook contains both serials and one-shots with a fair splattering of awesome covers and spot illustrations.


"The idea came to me when lamenting the popularity of Harry Potter and the lack of British all-age adventure comics," he reveals. " I should once again stress that by all-ages, I mean the output of writers, such as Stan Lee, Chris Claremont, Edgar Rice Burroughs, Tolkien, John Wagner and much of Alan Moore.  Growing up, as a kid, I thrilled to the likes of the Human Torch and Strontium Dog. And now, as I regrettably age evermore, I still see the Silver/Bronze Age as stand-out periods in the world of comics.

"I also fancied reading something a little more substantial," he adds. "Response to the fanfiction has been good and I thought that I would love to be able to pick up a journal of prose featuring the likes of Green Lantern, Dr Strange or Slaine.

"As usual, that got me thinking that, if no-one else is likely to do it, I might as well have a go. Perhaps not those characters but expect to see some familiar names from myth, legend and Starscape, as well as all-new material."

The first issue features a mix of sci-fi, fantasy, superpower & horror tales. In The Knights of Eternity by Chris Smillie, with art from Alex Ronald and Alex McCarthy, Merlin conquers time - but what does the Son of the Devil need the Ankh of Time for?


Extermination Theory by Matthew McLaughlin and Dustin Parr posits that even in the future, pest control is a nasty business - especially when it's Mankind versus gruesome alien bug!

Plus, in Identity Unhidden by Shaun Avery and Ivan Eight, we discover dressing in longjohns and fighting supervillains isn't the career most mothers want for their son but has the Attendant met his match as he confronts the Big Boss?


• The Starscape Storypaper is just £1.50 inc. UK p&p for over 50 pages. As well as a paper copy, there's also a means to download digitally. For more info visit: http://starscapeonline.com