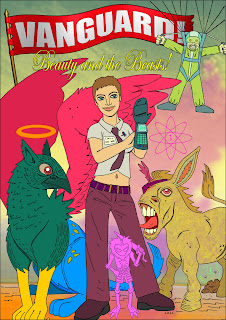 Comic creator Dirk van Dom and a few others from the 2000 AD forums have put together their own anthology title - Vanguard - and issue 1 is now on sale.

Vanguard features four (would be) on-going serials, written by Dirk and illustrated by some of the best talent working in the UK small press arena.

The title follows the 2000 AD formula of offering a varied menu of tales, and will hopefully feature something for everyone, with sci-fi action and butt-kicking heroines, fantasy adventure featuring Gryphons and Smoke Angels, a modern-day supernatural mystery thriller featuring a cast of cursed, tragic heroes with strange abilities -- and a retro-style "animals on the rampage" tale starring one very angry donkey!

As well as Dirk, other creators involved in the new book include David Blankley, Louis Carter, Brigonas Mac Giolla Chomhaill, Owen Watts and Liam Byrne, who provided the cover.

"My collaborators on this project have put their all into turning in some fantastic-looking pages and the whole thing sits together really well," says Dirk. "With this first issue, our small-press adventure is off to a fine beginning, and I can promise that it will only get better from here.

"The first issue of Vanguard is very much an experiment, to test the waters and get some feedback on the stories, see what works and what doesn't. The aim is to produce a regular - if infrequent! - comic that will develop the stories and characters within and allow them to reach their natural conclusions.

"The plan is that there will be two issues of Vanguard published each year, probably Summer and Winter editions, though how feasible/workable this is all remains to be seen... Issue 2 is certainly going to happen by the end of the year."

• For more information and how to order visit: http://vanguardcomic.blogspot.com/