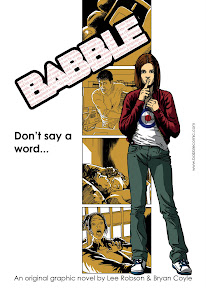 Indie British and US publisher Com.x has announced the impending publication of Babble, a project from writer Lee Robson, illustrated by Bryan Coyle, who are perhaps best known for their contributions to ace indie title FutureQuake and the Accent Press range.

Babble was originally slated for release by Insomnia Publications, before the company’s demise last year - and Com.X support of the project is a big boost for two creators who have done such great work in the British 'small press' community for many years.

hails from the north east England and is quickly gaining ground in the UK independent press scene. His work has featured in the Eagle Award nominated FutureQuake, and its sister publication, horror anthology Something Wicked. He’s also a regular contributor to Accent UK’s series of themed anthologies such as Robots and Western and the upcoming Predators and Victoriana.

Irishman Bryan Coyle, who ives in Cookstown (" the Los Angeles of Mid Ulster", he claims) is a veteran of the Irish and UK independent press scene. As well as self-publishing the abominable Pony School and dabbling with web comics such as the Doctor Who spin-off The Forge, he’s also a regular contributor to the Eagle Award nominated FutureQuake, its sister publications MangaQuake and Something Wicked, the award-winning Solar Wind, the acclaimed Omnivistascope and the Accent UK series of themed graphic novels.


blog or the Facebook page
Posted by John Freeman at 9:43 am