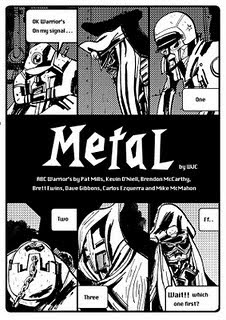 Right, what's happening out there...

Lew Stringer's ace comics blog informs us that Dez Skinn has a new website. Dez was, of course, the man behind such titles as Warrior, Comics International and Doctor Who Weekly (still with us as Doctor Who Magazine).

Warwick Johnson Cadwell has posted his ace A.B.C Warriors strip from new 2000 AD fanzine, Nu Earth online at his blog. Warwick sent me a copy of the fanzine and I have to say it's, well, zarjaz. Will Kirkby has done the same with the pencils for his cracking contribution, a fab Rogue Trooper strip. Tharg, employ these men now!!!

Paul Gravett's new article about and interview with cartoonist Simone Lia is well worth checking out. In the interview, Simone talks about various topics, including her new work-in-progress, a graphic novel about her relationship with God:

"I was passing through Leicester Square almost three years ago and the bubbling inspiration came to me and I had a fuzzy vision of the completed story whilst standing near a red telephone box," she explains. "I was so excited and happy to be suddenly inspired again, I had a sense the book would be about an adventure with God. When it came to starting the work however I really didn’t know how to go about having an adventure with God and how I might show it in a comic. Showing that relationship is such a personal thing. Part of me definitely did not want to open that up for everyone to see but the feeling to make the book didn’t go away. It’s been taking a long time to produce partly because of that uncertainty of depicting this personal area of my life and also because the story in real life has had to unravel."

Paul also sends word of an opportunity for creators of humorous zines and comics to have their work displayed in the reading room at Tate Britain as part of their Rude Britannia exhibition.

"Help us curate the reading room of the Rude Britannia exhibition with an array of humorous fanzines, comics and home made publications. Rude Britannia: British Comic Art celebrates all that is comical, satirical, political, absurd and bawdy in British art from 1600s to today and we would like you to respond to these themes. The best fanzines will be selected by curator Cedar Lewisohn and placed in the exhibition space for a period of time. Please only send publications that you think are funny. We will notify you if your publication has been selected, but we cannot commit to sending your publication back to you."

And finally, small press comics news blog Bugpower draws our attention to another opportunity for self-publishers:

"Cerebus.TV are starting a "Small Press Comics Focus" feature, and they are looking for submissions for future episodes. Email indie@exoss.net for details. You can see a promo for the first one HERE. The 'pilot' has been put together by the guys at Cerebus.tv and features the minicomics of Dan Fish (Hey, that's ME). It appears as part of Episode 30, which streams online starting Friday 18th June and 24/7 all week long."
Posted by Matt Badham at 9:05 am

Got my copy of Nu-Earth the other day and it is cracking stuff, especially vital for anyone who had wondered about a Dredd/Dr Who crossover (with an excellent ending winking at a recent Dr Who-related controversy).