Straight from the Commando C.O. comes all the gen on the four latest issues of Commando available from 17 June: 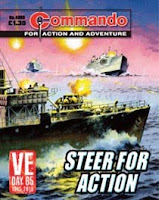 From the first day of war in 1939, the soldiers, sailors and airmen of the countries opposed to Hitler’s Germany knew that it would be a long, bloody struggle before the Nazis were toppled to defeat. They couldn't know then that the day of victory would come in May, 1945, and for those six years of savage war, Clive Sterling, Royal Navy, would sail hostile seas and face deadly danger almost every day in that fight for freedom. 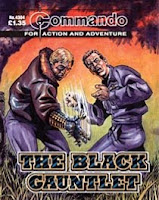 Two pilots duelling to the death…just what you’d expect in the days of the Second World War. But what was unusual about this pair — one British, one German — was that there wasn’t an aircraft in sight and they were fighting on the ground. This clash was just as deadly, though, for on the German’s right hand was a heavy spiked and studded gauntlet…one blow from which could be fatal! 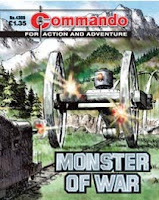 Central Russia, 1918. An armoured train, bristling with artillery and machine guns is locked in a duel to the death. But what with? A spindly freakish contraption seemingly too fragile for battle. Yet this nightmare of a device blasting away with its own deadly guns towers over the train. Where has it come from, this monster of war? And why is it crewed by the Royal Naval Air Service? 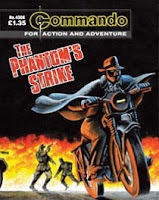 A cloaked and masked figure who stalks the city of Paris protecting the underdog and escaping through the sewers to outwit his pursuers — obviously this is the invention of a Victorian mystery writer, not a real person. Yet, this was 1944 and, if you asked the German authorities or the pro-Nazi French Militia, you would find that this character was all too real. And all too deadly.

Email ThisBlogThis!Share to TwitterShare to FacebookShare to Pinterest
Labels: Commando