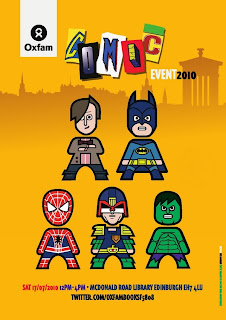 Following on from last year's event, tickets are now available for the snappily entitled Oxfam Bookfest Comic Event in Edinburgh - Issue 2. This discussion based event will take place on Saturday 17 July 2010 in Edinburgh's MacDonald Road Library which is only a 10 - 15 minute walk from the city's main bus and train stations.

After last year's discussions about Scotland in comics and Scottish comics in general, this year's theme will be, like the Dundee Comics Day three weeks beforehand, the evolution of a comic from original idea to writing, art and publishing. As with last year the day will feature contributions from Marvel Heroes and Commando writer Ferg Handley, writer and former 2000AD editor David Bishop and Insomnia publisher Crawford Coutts. The four hour event begins at Noon with tickets costing only £3, the same as last year.

Tickets are now available from the Morningside Oxfam Bookshop which once again is organising the event. It is located at 210 Morningside Road, Edinburgh, EH10 4QQ, and the telephone number is 0131 4469169. The shop can also be contacted by e-mail via oxfamshopf5808AToxfam.org.uk.

The fun poster for the event is the work of Edinburgh based artist Ben Morris who is a regular illustrator on Doctor Who Magazine and the junior Doctor Who Adventures.

There are more details of the 2010 event at the Oxfam BookFest website and on the Oxfam Morningside Twitter feed.

There are videos of Ferg Handley and David Bishop at the 2009 event on YouTube.
Posted by Jeremy Briggs at 4:58 pm