In Review: IR$ - The Corrupter 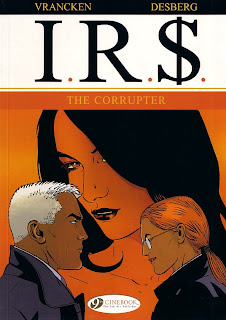 The Corrupter is the second and final part of the IR$ story begun in Silica, Inc. which was reviewed on downthetubes when it was published earlier in the year. That first book left the reader wondering about a red haired woman and, to a certain extent, just how the apparently divergent strands of the plot were ever going to get pulled together.

Larry B Max, taxman with a gun, continues his investigation of the activities of a company, Silicia, that apparently deals in assassination. Learning from the CIA that they have used the services of Silicia in the past, Larry has a run in with the mysterious red haired woman who points him in the direction of a new tax trail before apparently attempting to kill him. 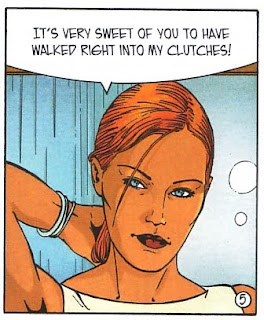 In this second half of the story, originally published in French by Lombard in 2004, the reader is given a lot more information about the redheaded Silicia and Max's own relationship with a phone sex worker in what seems, at times, to be an overload of irrelevant information. The Corrupter does eventually pull all these strands together but it certainly takes its own sweet time about it. Just who is genuinely corrupt and who is being forced into corruption and why is left to virtually the final scene.

Writer Stephen Dresberg manages to cram a lot of strands into his plot between the Internal Revenue Service, the police, the CIA and the American Mob as well as local and national politicians and a foreign government. While at times it does seem like too much, everything does eventually tie together. Bernard Vrancken's art is clear and concise without being overly showy and often has to content with large speech balloons as the plot gets more convoluted.

Overall The Corrupter does not quite live up to the promise of Silicia, Inc. but it does provide a highly intelligent, calculating and coldblooded villain in the form of Silicia herself, a character that hopefully the series will return to in the future.

There are more details of the English language versions of IR$ on the Cinebook website.

More details of the original French IR$ publications are available (in French) on the Lombard website including details of the 12th album, Au Nom Du President, which is due for release at the end of the June.
Posted by Jeremy Briggs at 7:00 am