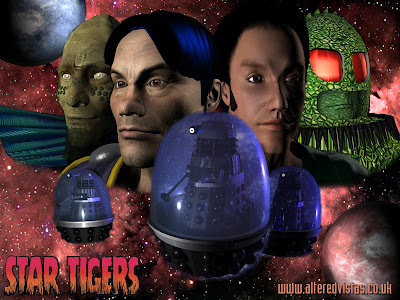 Following the release of Star Tigers Chapter One at the beginning of the year, Doctor Who fan film makers Altered Vistas have just announced the DVD not-for-profit release of Chapter Two: With Friends Like These, based on the classic Doctor Who Magazine comic strips starring Ablsom Daak, Dalek Killer.

This second chapter of Star Tigers - a series for Doctor Who Weekly created by Steve Moore back in the 1980s - sees Abslom Daak and Prince Salander set off across the galaxy in search of a crew for the Killwagon. First is Harma the Ice Warrior, working on the seedy world of Paradise, then Vol Mercurius, owner of the planet Dispater... But Dispater is being invaded by the Daleks.

The fan production comes with the usual raft of bonus features: a Star Tigers Gallery; dozens of images from the original unlettered strip, reprinted with kind permission from David Lloyd; and the Making of Star Tigers, a comprehensive documentary illustrating the creative process and taking you through script, sound design, character and set design to animation and editing.

Also included is World of the War-King, a story based on an original, unpublished Star Tigers script written by Steve Moore. Back in 1980, Steve wrote a third story in the Abslom Daak/Star Tigers sequence that was never published, and he eventually forgot about the story. Until recently, that is. Upon rediscovering the original script, he sent it to Altered Vistas who have created a new version of the strip in the style of their animated Star Tigers - and you can also read it online here.

An exclusive ‘living comic book’ version of this 1980 comic strip that contains one or two surprises...

• Visit the Altered Vistas website
Posted by John Freeman at 10:47 am