In Review: Buck Danny - The Secrets Of The Black Sea 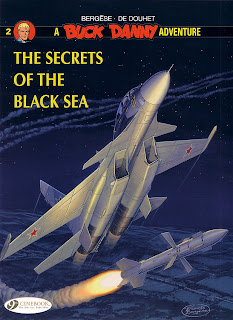 The Secrets of the Black Sea

is the second of Cinebook's translations of the many adventures of American military pilot Colonel Buck Danny.

Buck Danny was created by writers Georges Troisfontaines and Jean-Michel Charlier with artist Victor Hubinon for Spirou magazine in 1947. Over 50 albums later Danny is still flying contemporary aircraft whilst both he and his colleagues have not aged, whether they are flying for the Sino-American Flying Tigers against the Japanese in World War 2 or the latest American air domination fighter in Cinebook's previous Buck Danny title Night Of The Serpent. The Secrets Of The Black Sea was originally published as Les Secrets De La Mer Noire beginning in issue 2903 of Spirou in 1993 and then released by Dupuis as the 45th Buck Danny album.

Set during the last days of the Soviet Union in July 1991, Danny is flying F/A-18 Hornet attack fighters for the US Navy off the USS Theodore Roosevelt aircraft carrier when he is called to the Pentagon for a diplomatic mission. This requires him to visit the new Soviet aircraft carrier Kusnetsov to assess its capabilities under the Soviet Union's new sense of openness - Perestroika. Those readers who know their aircraft can immediately tell from the cover illustration, of a Soviet Navy fighter being attacked by a Soviet anti-aircraft missile, that the visit will not all be plain sailing - and it isn't. What begins as apparently the US Navy versus the Soviet Navy quickly becomes the Soviet Navy versus the KGB as a coup is plotted.

Francis Bergese's aircraft artwork is always a joy to behold, be it World War 2 planes in Biggles: Spitfire Parade or the more modern aircraft of Buck Danny, but his plotline on Night Of The Serpent was perfunctory following a simple structure which seemed designed more to get a variety of aircraft types into the story than to tell an interesting story. However The Secrets Of The Black Sea is written by Jacques De Douhet and he constructs a political and military tale that is effectively a prequel to the real life August 1991 coup attempt against Soviet President Gorbachev. 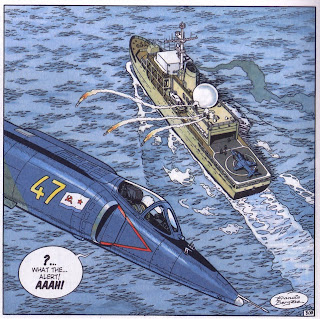 Since it is a Buck Danny book there are still a remarkable number of different aircraft types for Bergese to get his inks around, a job for which he is more than capable. On the American side he illustrates virtually every front line US Navy aeroplane and helicopter of the time period while on the Soviet side, as well as the Sukhoi Su-33 on the cover, he manages to incorporate Su-27 and MiG-29 fighters, Ilyushin airborne refueling and AWACS planes, Mil and Kamov helicopters and both single and two seat versions of the Soviet equivalent of the Harrier jump jet, the Yak-38 Forger.

Unlike the previous Buck Danny book, The Secrets Of The Black Sea is satisfying both visually and storywise and hopefully further releases will be of the same standard.

• There are more details (in English) of the Dupois French language Buck Danny books on their website.
Posted by Jeremy Briggs at 7:00 am